So some blue belt reflections on the first few weeks. Well I’m sorry to report the myths are all that. Just myths! Your jits doesn’t instantly improve by at least 10%, white belts don’t move out of the way in awe and you will still look at a technique your instructor is showing and wonder why he’s now speaking another language! Or that might just be me when I’m tired after work 😉 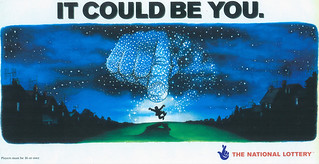 Getting my blue belt wasn’t a moment of shock and awe. It didn’t feel like that old lottery advert where a big hand comes out of the sky and says “It’s you!” Or anything that dramatic.

That’s not because I felt it was in the bag or anything like that but just due to the build up of a number of things. Not least that  my gym only does grading’s twice a year so we have definitive milestones, you’re not suddenly going to get it sprung on you in class – so I kind of felt prepared for the challenge and responsibility so to speak.

When my name was called I didn’t feel surprised, nervous or overly emotional. My first thought was very much feeling relieved (i’d finally got it!). This was quickly followed by watching for my teammates reactions. Your coaches know when you’re ready (otherwise they wouldn’t award it!)  but your peers are the people you’ve rolled with every week and sweated it out with so their seal of approval was important to me.It was the whooping, cheering and smiling from them that made me relax and smile as I went to receive it! Social media reconfirmed this when my phone didn’t stop pinging all night! I had some lovely direct and private messages and conversations that really meant a lot to me (and may have resulted in a little bit of dust in my eye because I don’t get emotional – honest!).

The bonus of not being thrown by getting the belt meant I had very realistic expectation of training the next day. Training went exactly as I expected – just like before sweaty, squashing, annoying and occasionally frustrating! Although training for the rest of the week actually went slightly better but there was still plenty of tapping and definitely no extra magic mojo.

That weekend was also my judo grading so I also had the focus of having to get my minion bottom into gear and do my Japanese revision (apparently I can’t just call it the fat man throw!). Luckily it all went to plan and gained my 2nd Kyu – what can I say blue belts you work for ages for one than two come along at once! It was even cooler as I got to share the moment with my original BJJ coach Liam Wandi who had also done his (much deserved) grading. 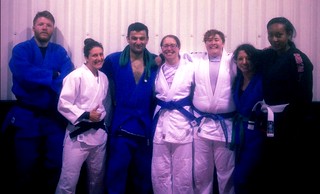 In my second week training went much better, again no magic mojo but felt I was holding my own again. But I do have a challenge waiting for me at the end of the week; my first blue belt competition!  Doing the gi will be nerve racking enough but I have decided to be brave and throw myself into the no gi as well! So my first ever comp at blue is also going to be my first no gi competition too! I’d like to say “no pressure” but seriously I feel in a bit of a win win situation. I’m newly promoted and I’m going against some pretty experienced girls include some mma fighters. If I win bonus, if I lose well I’m a baby blue! I’ll do a quick update of how it all goes next week.