This weekend saw that latest edition of the UK Female Fighters Camp take place in Manchester. The female fighters camp started in 2014 with Judo Olympian Sophie Cox  and MMA professional Rosi Sexton coming together to try and form an annual camp similar to those held in the USA and Europe to give woman a chance to share ideas, work together to improve their knowledge and train together. The camp is now in its second year and has become a bi-annual event. Held at Fighting Fit Manchester the camp is now also supported by BJJ Black belt Anna Mayne and World Thai Boxing champion Rachael Mackenzie.

Previous camps saw women of all ability training together in mixed sessions. But as the camp has grown to manage both mat space and coaching the sessions have been tailored into advanced and beginners groups. Although it means you physically can’t do everything on offer (unless you can split yourself in two!) it does mean more high quality coaching all round.

The Saturday was the no-gi day. In the morning I took part in both of Anna’s BJJ sessions and did some thorough drilling on standing guard passing variations and tightening up my passing footwork, along with a kimura attack and some finer details on the set up.

I didn’t take up the full opportunity of the days open mat session due to trying to reserve my strength for the Sunday as well as being slightly cautious as part of my competition prep. I did however get the chance to roll with my friend Carol – well I say roll it was more get dominated and tied up for a few minutes but its always great fun! My remaining open mat time was spent with my friends Fran and Oy. With Fran I drilled what we had covered in the advanced class whilst with Oy we recapped some of the key moves from some of the recent seminars we had both attended which is always great! Nothing like drilling moves to get them as “smooth as butter”!

After lunch and some relaxation we had a nutrition session with Fighting Fit’s Mike Woodhall. I only attended the advanced section that was covering weight cutting and competition nutrition. It was reassuring to know I wasn’t do it all wrong! Plus I picked up a few minor tweaks to support my current weight loss programme / adapting my diet to the late night training regime.

This was followed by the last session of the day which was the advanced no-gi judo with Sophie. There is no way I am sharing the secrets of that session as I am already putting some of them into my game plan! Lets just say it was around working the “whizzer” to your advantage and leave it at that!

The evening saw a few social drinks (or cokes for me due to my current diet!), epic rain, huggles with a gorgeous young man call Leo and quizs which naturally my team won lol!

The Sunday was all about the gi and I took a similar approach to the no gi day by only attending the grappling sessions which meant attending both Anna BJJ sessions again. The advanced session focused on spider guard sweeps, in particular chaining them together finishing with an x-guard sweep to knee on belly. The session really complemented what my gyms syllabus was last weeks so it was good to play around with some new entries and set-ups. 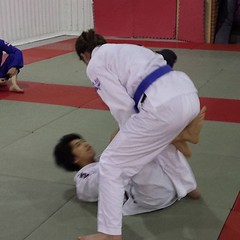 The beginners class focused less on the sweeps and more on the triangle attacks. However Anna forever keen to throw a challenge or two at people showed me and my partner a rather interesting inverting variation that finished in mount. It took a lot of partner co-operation to get right and had plenty of giggles and mishaps on route! I don’t think its going to be in my game plan straight away but I somehow can see Rachel my partner for the session pulling it on me when we next face each other in competition!

There was less time to roll today due to the schedule being a little more packed but I did take the advantage of couple of rolls as well as some drilling and braining picking on the de la riva guard. Thanks guys for all the bits. I will keep working on it! Sophie’s advanced judo was again fabulous. Lots of grip fighting tips, a few Sumi Gaeshi (suicide throws) and of course a few options into hip throws! It also saw me reunited with my original judo partner in crime Fran who is everyone’s favourite uke (if you can get under those hips!). The session was finished off with some situation and standard randori including a couple of rounds that went to “Sophie time” – which may be the longest 4 minutes ever experienced! 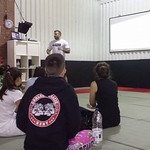 The post lunch talk was Fighting Fit’s Simon Price. He covered a range of topics including dealing with specific injury queries, stretching technique and a whole host of information on self massage including an impressive backnobbler! 😉 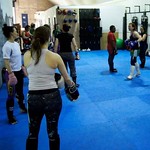 As mentioned at the beginning of the article throughout the weekend Rachael put on a host of Muay Thai sessions (which looked awesome!) but due to preparing for competition I couldn’t really dig out my old thai boxing kit to see if I still had those Phoenix girl moves! I couldn’t make Day 3 of the camp which was focused on mixed martial arts due to the fact it was a Monday and work had to come first (you have to fund training somehow!). But its not all bad news as the evening had my usual BJJ competition class to look forward to!

Overall it was another fantastic camp. Over 30 women got to enjoy lots of martial goodness and I particular had a great time rolling with some old and new friends. Anna and Sophie are both fantastic coaches and friends of mine so it is always a pleasure to spend a weekend with them on the mats. I would seriously recommend the camp to any female grappler or martial artist not just as a training opportunity but as a great opportunity to have a weekend in Manchester, network with similar women and generally have a great time. 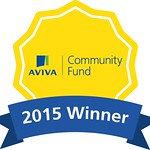 Also a big thanks to the Aviva Community Fund who generously support this camp as well as everyone who took part in the voting campaign who helped us win the funding! Without Aviva’s and your personal support the camp certainly wouldn’t have been the success it was!