My blog title kind of say it all. This blog is a brief overview of my recent adventures training in LA and at the World Masters Championships.

So first things first why did I choose to spend a week in LA before my competition? Well, my first reason was simple and that is I hate jet lag and my previous transatlantic trips have taught me it can take 5-7 days before I feel human!

Secondly, I have been to Vegas three times before and whilst Vegas is epic for post competition eating its a bit harder to control your food out there (LA is easier for food management).

Finally, LA has the wonderful Redondo Beach which as well as being a great part of LA to chill out in is also the home to “The Garage” and home of Combat Base head honcho Chris Haueter and his epic wife Melissa. 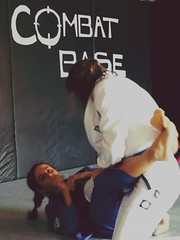 I’m not going to bore you with all the detail of my training camp but I got a solid 6 days of technique, drilling and rolling with some fabulous people. It was also great to see and roll with many of the guys from our trip last year. A special thanks to Melissa who spent a lot of time working with me. I not only learnt heaps but always felt totally supported  It was a pleasure to roll and get pretzeled by her!

We headed to Las Vegas on the Wednesday (2 days before competition). Enough time to allow for delays and to rest and settle in but not too long for me get ultra nervous. In hindsight I would have rather spend an extra day in Redondo as food prep was challenging in Vegas (but hey at least there was Whole Foods!).

The competition it’s self was in a new venue which caused a host of challenges including poor spectators spaces and the comp running behind schedule (a lot). Old Munki (my hubby) competed first so I was at the venue for the start of the event which gave me lots of time to find changing spaces, toilets and water supplies. But it did mean a lot of hanging about too, luckily for me it was only running an hour or so behind schedule by the time I competed (compared to 4hrs at the end of the first day!).

There isn’t much to write about our competition as neither of our fights went our way. I drew last year’s champion in my first match. She was simply an excellent athlete with a great game plan that I couldn’t match and totally deserved not just to win this year champs but also her promotion on the podium!

I was obviously devastated but my matches will never get tougher or more pressured than that. Plus I did have the pleasure of having both Chris and Melissa in my corner and whilst I would have loved to have performed better for them having their support before and afterwards meant a lot. 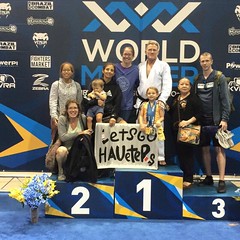 Although there was a lot of athleticism on display as it was a masters competition I thought a lot of the matches showed a much more tactical approach as well as some amazing techniques.It was very much more the little things and solid technical execution that made the big differences in the results.

It was also great to return some support back to Melissa and Chris (and get a slightly sore throat through yelling to much!).

After the competition it was time to have fun, eat and drink which you don’t really need to know about as well what happens in Vegas – stays in Vegas!

Doing the world masters was a great experience. I picked some great polish to my game whilst in LA with Melissa. Plus I can honestly say I have competed at the top level of my category which I can only take as a positive. I’ve already had that discussion with my husband about if we would do it again next year and that answer is life and work allowing a resounding yes!  I’d recommend anyone who has the opportunity to take part to just do it!

I’ve already took the plunge and booked in my next couple of competitions before the worlds to make sure I didn’t lose my momentum in training. I’ve taken a few days off to recover and now its back onto the mats. My next comp is actually a change of focus and is all about the judo (more details in a future blog). Then quick trip to Berlin to try my hand at competing abroad again!

From there who knows perhaps the Europeans in Lisbon anybody???