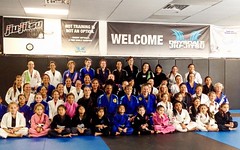 Whilst out in Las Vegas I was lucky enough to attend the opening of the Nevada chapter of Girls In Gis and I thought it was such an amazing event that it definitely deserved a blog post of its own!

Girls in Gis has been happening in the US for around 6 years and is a simple concept to host free training session for women and girls of all skill levels across the states which are hosted by women from a range of schools (regardless of affiliation). This seminar was hosted by Drysdale jiu-jitsu and Black Belt Sophia Drysdale.

Firstly the gym. Drysdale Jiu-Jitsu is a lovely gym not too far away from the strip in Vegas (I took a taxi from one of the more downtown hotels). It has two lovely mat spaces and the one we used for the seminar had nice air conditioning (which I appreciated!). The gym is obviously female friendly with female changing rooms, toilet and shower. The academy also has a full range of classes so even without a specific event its definitely worth a visit if your in the area.

The event had over 40 women attending including a full range of abilities ranging from some of the cutest kids you’ve seen on mat right through to black belts. During the event there were four women black belts on the mat which I found amazing (there’s only about six in the whole of the UK!).

It was actually great to share our experiences even if they hadn’t been that successful. It also meant I had some training partners who were as “tired” as I was post competition!

The actual seminar itself consisted of introductions (all the girls were American with the exception of myself and a Canadian) but unfortunately there wasn’t a prize for the furthest distance travelled lol! Then a technical session led by Sophia including some nice triangle set up using the Spider guard. I will be honest my head wasn’t in the best learning space but I did pick up some nice tips which I’m looking forward to trying back at home.

Then there was some games / challenges to win some gis. 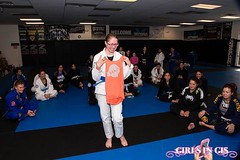 Unfortunately the war tribe gi was not to be mine this time although I actually did pretty well in the arm bar challenge it was my partner who actually won (as we all know its down to having a good partner!). Although all was not lost as I did win a tank top from the lovely Detales Clothing (who was one of the companies support the event) in the raffle. We then had more photos, rolling and Facebook adding.

I had the opportunity to roll with some lovely blue belts as well as the fabulous Sophia herself. I’ve discovered I actually love rolling with top level women

not because I like having my opponent stuck to me like glue or moving smoother than butter around me whilst tapping me repeatedly. Nor is it just for discovering multiple gaps in my game but simply to be able to see and feel up close certain moves and transitions. I’m not sure if its my short sightedness or simply my learning style but I just learn so much from it and really appreciated the experience.

Although the event did lack the cake and baked goods of a British female open mats it was still a fantastic event. I was really unsure about attending on the day due to being tired and a little bit of burnt out but I didn’t regret it for a second. Great instruction, positive atmosphere and some fabulous women. If you are ever in the US near one of these events please do make the effort to attend (I even made a video testimonial saying just that!)