Ok, admit it how many people clicked on this blog just because of the title alone? I would love to say that this blog was going to pass on some top secret mojo that was given to me in a secret ceremony by a legendary black belt but it’s not! It’s far more practical and realistic than that.

Generally you do get better at BJJ by doing BJJ and there are no magic shortcuts. However here are some things that might help if you’re preparing for competition especially during your off mat time (everyone needs rest days!) or if like me recently you’ve been struck by the dreaded lurgie!

Learn the rules
It sounds stupid but I have recently started refereeing. As well as getting a different perspective of the sport I’ve also found that there is really a surprising amount of people at a range of belts that don’t know the rules.

Knowing the rules is pretty useful when competing including most importantly that you can be more aware of what actually scores and when! Often people overlook this despite that fact points do make prizes! There are a number of ways you can learn the rules – read the rulebook, watch a video (warning this video is a little out of date!) or attend a course (there a number being arranged by the UKBJJA).

Understand how a comps are run
This is linked to the point above but is aimed slightly more at beginners or those thinking about their first competition. Consider learning how competitions are run. 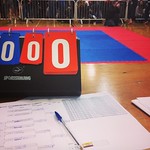 Knowing how brackets and timetables work will really help with those competition nerves. The best ways of doing that is watching – turn up early or go to an event and watch what your teammates do and how things work or volunteer at a local competition or a comp that your club may run. Table running and scoring is a pretty thankless task but it is a crash course into behind the scenes of a competition and how things work. You also get a great seat to see some potentially great BJJ!

A quick off topic confession linked to this that as a table judge when you’re trying to simultaneously call brackets, time a match and do the scoreboard it can be slightly stressful being asked multiple times by someone when they’re next on. We know your nervous and we will always try to help but be patient with us too. A slight tip I’ll give is that when I’m working solo on a table I tend to put the sheet on angle / to the side if i’m not writing on it. If you want to see the brackets just look over my shoulder and read it (I won’t mind!).

Game Planning
Competitions are great at exposing areas of weakness or where you need to work on it your game but what if there was a way of doing that whilst you prepared for competition? That’s were game planning comes in! Taking time to sit down and thinking about your go to moves and what you actually know is a really valuable opportunity not just to identify your A game but also where you need to look at fixing gaps not matter what your belt level or experience.

There isn’t a set way of doing it. I’ve done two approaches. This first was essentially a homework task set as part of my private lessons with the lovely Liam Wandi based on his blog on the topic. I found doing it a huge confidence boost actually realising how much I knew and could perform but it also instantly spotted gaps where I had less knowledge or go to options.

The second approach is essentially the next step of that and streaming it down. 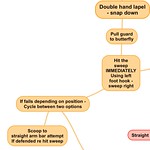 You can do a spider diagram on paper or use a mind mapping tool to plotting those go to moves in competition i.e. i want to do x takedown, pass to side control etc. There are a host of free apps out there including MindMeister. Just use what version works best for you. I’ve found this part useful for focusing my drilling time and also really useful in comp classes – it’s pretty hard to impose your game if you don’t know what you want to impose first!

I know for many of you these tips might be considered common sense by some but I expect those people also have a reasonable amount of competition experience. It’s easy to forget how hard things are when you’re new to competing. I was lucky that I had someone at the start of my competitive experience who took the time to talk through these things with me so hopefully this blog will pass on this information and help out a few peeps in return!