I have never had a gi that I didn’t want to put on straight away when it arrived. That changed when I got a A1 Shoyoroll MAGIKimono! When it arrived it felt like some jiu jitsu voodoo had come in my post! Maybe it was just returning for my trip to the states? Maybe it was the fact that this gi just looked like serious business? Or did I just not feel ready to wear my first Shoyoroll? In either case I have put off wearing until December (as my own personal Christmas present) which obviously delayed my review. The question is though does it live up to the hype!

As mentioned above this is my first Shoyoroll. I’ll be honest I really didn’t get the whole Shoyoroll thing and hadn’t really seen a gi of theirs that I liked enough to pay that price point for ($210 / £139) until the MAGIKimono collaboration was in the pipework and I knew it was a gi I wanted to get.

A quick google of MAGIKimono will get you the whole host of information you need but essentially it’s the brainchild of Chris Haueter and that was reason enough alone to take the plunge and sit on my laptop pressing refresh repeatedly until I got that A1 gi! 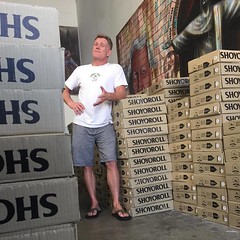 In terms of technical detail the blurb surrounding the gi states it is “a Combat Uniform built to a premium standard. It’s a one piece jacket maxed out of pearl weave with a foam collar, reinforced seams and a tailored fit whilst the pants are made out of twill cotton.”

On arrival you know you’ve bought something special as you open the pizza box containing the gi. Before I even looked at the gi I was fascinated by the operators manual that came with it featuring history and insight into BJJ including Chris Haueter’s wisdom and artistic skills. We loved it so much its now actually framed in my house! 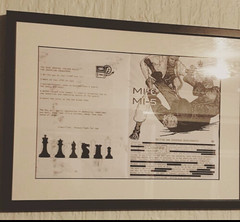 The gi itself is beautiful. I got the standard black on black but the design features a host of specific details that you notice more and more each time you wear it. But because it is black on black its difficult to take decent photos of it and the pictures I’ve taken really don’t do it justice.

Although it is supposed to be a lightweight gi I’ll be honest it didn’t feel that way when I tried it on – it felt tough and like a bit of a “tank” of a gi. However, the truth is in the scales and it weights in around 1.8kg making it heavier than my competition gis but not that heavy at all compared to some other gis and how tough it actually feels!

The trousers fitted straight out of the bag. A nice length combined with the tailored fit and slightly heavier fabric than usual means they’re actually a rather slimming pair of gi pants! The seam detail down the front also helps that effect and creates a much leaner and meaner outline. The additional loops at the waist were great for helping keeping your trousers in place but are slightly confusing the first time you fasten them. 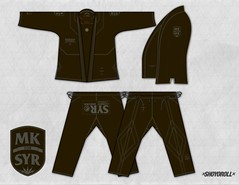 The jacket like many gis I buy was a little too baggy. It was ok to wear to training but I was definately hoping for a little bit of shrinkage. In terms of design again everything in black on black and full of details (including the tag). I particularly loved the tape running inside the gi (think street, train sport, practise art). Its a very clean and tasteful jacket and at first glances most people won’t notice the detail until there up really close (preferably due to a strong cross face!).

It was actually quite rare for my gis in that I was actually more obsessed with the fabulous pants than I was the jacket! These are quite possibly my favourite every pair of gi pants ever! The only major downside was the black on black made it really difficult to photograph!

This gi is jet black and the colour has held really well but it does lead to one slight problem, it does make it a fluff magnet. In my gym every bit of white gi fluff from my training partners found its way into my gi. It actually probably wasn’t that bad but it did show up a lot of white fluff. But hey on the positive it means blood won’t be that easy to see!

The pants performed incredibly well. As mentioned above the loop system meant they stayed up well and they felt great to move in. Very much a case of a slim look but full movement. I had a slight accident during washing where the cord got caught in the washing machine. Don’t panic though everything was fine but it did mangel the cord slightly so I am anticipating replacing it at some point in the future. I don’t think its a design fault just one of those random accidents. As you can see there was shrinkage on the pants but I’ll be honest i was actually surprised at the difference in measurements as I really hadn’t noticed and there still my favourite gi pants (in case I’ve not mentioned that enough!)

The jacket has been a little bit disappointing. It is slightly larger fitting which has made it less comfortable to roll in. Generally that rolling off the shoulder feeling that I get with broader gis. There has been reasonable shrinkage in the jacket and it does fit slightly better as result but of I am being honest I will be giving it a little blast in the dryer the next time I wash it. Just to try and get a little bit more shrinkage happening. It was either that or look at some serious muscle gains! Ideally I’d love take another 1cm or so off the sleeves and to see if I get a little bit of a tighter fit.

The gi is competition legal but if I’m honest due to it style and weight I wouldn’t use it for competition. What has been created is a beautiful hard wearing training uniform. I have no doubt that this is a gi I can roll in for a number of years and that i can wear as blue belt and well beyond (not because I think I’ll progress quickly but because this gi won’t quit on me!). If you are a broader individual or if you like broader fitting gi’s then I’d certainly look at checking this gi out!

Overall I am not convinced this is the start of a Shoyoroll love affair but I would certainly recommend a closer look at any MAGIKimino related drops in the future. In a nutshell its strong, stylish and a little bit of BJJ history wrapped up in one gi!