Last weekend saw the Polaris Pro 3 Event take place. Several of my friends and team mates made the long journey down south to take over the first two rows of the events whilst I stayed up North with the Factory Girls to watch it in the comfort of my team mates Kat’s home. So this weeks blog is a mini review of the event from my perspective.

Up first was the undercard which was streamed free of charge on youtube (you can find it here if you missed it!). I’m not going to comment on all of the matches during the night to spare the length of my blog but I will obviously highlight my coaches match (Adam Adshead) against Phil Harris. Now obviously I am slightly bias in my observations after watching Adam prepare for this match. It was a dynamic match with plenty of scrambles and action definitely no stalling for a draw! It was great to see Adam generally playing his game (like he tells us to!) including working the triangle set up as well as several heel hooks. Phil caused a few challenges but overall it was a match that way to short and it would have been interesting if it been the longer 15 minutes that the main card had.

Now before the main card we had our own unique challenge. Getting food! Ordering the food was a unique challenge due to leaving Di in control of the laptop with seven hungry female grapplers giving their opinions but it was certainly was entertaining and had the desired result! Now watch the event with the girls did limit the attention I could pay to the matches as there was important gym based conversations to be had but some observations from some of the main card (which were all draws)

Joao Miyao x Yukinori Sasa (Gi) –  This match didn’t hold any surprises and played out as expected with not a ton of action and a lot of work for positions. However total respect to Yukinori for escaping Joao’s body triangle / choke attack from the back! I totally thought he’d get the choke!

Darragh O Conaill x Jon Satava (Gi) – One of our team mates is originally from Darragh’s gym so again a slightly bias crowd! However I thought Jon showed an amazing passing game. Essentially playing very much Darragh’s style of game almost against him! If this was an IBJJF match then it was a points scoring clinic with passes and a steady improvement of position. However this was a submission only match and in the last few minutes Darragh looked much more dangerous on top. 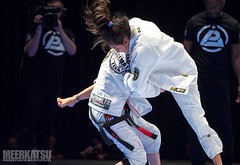 Gezary Matuda x Laurence Fouillat (Gi) – After seeing Gezary’s quick submission of Michelle Nicollini at the last Polaris a lot of the hype had been focused on her (and rightly so) but Laurence is well know on the international circuit and I have seen her fight both at the World Masters and the Europeans so I knew this was going to be a good match up. The march was fast paced with Gezary showing constant pressure passing attempts mixed with some lovely choke set ups to either bait for a pass or to get the tap. This included a lovely old school judo style choke. However Laurence showed fabulous guard retention and sweep attempts. I really found it was a great gi match to watch.

AJ Agazarm x Jake Shields (No Gi) – AJ stole the show at the last event against Daniel Strauss but Jake Shields is a well know face from the UFC (and a slightly underrated grappler). Before the fight my money was on Jake Shields and it proved to be a good call. This fight was intense from the start with the body language as they came on the mat saying everything. This fight will be remembered probably more for the aggression and controversy (face slaps, eye gouge and bad blood in the post fight interviews) but the reality is Jake Shields dominated the fight and gave a dominant display of grappling. That being said I’d still watch a rematch just to see what happens! 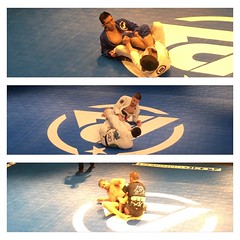 Rousimar Palhares x Garry Tonon (No Gi) – This was the match everyone had been waiting for. No ankle, foot or knee was safe as we started this match! Although no limbs were taken home the start of the match showed intent with both competitors aiming straight for the legs! If I had to pick a more active or dominant fighter then I would have to say Tonon in my eyes. Despite being against an absolute beast of an opponent he never stopped moving and attacking (potentially part of his survival tactics?!?) Triangle attempts, mount and back takes were all achieved by Tonon and despite some specially takedowns and flips from Palhares, Tonon showed he was a top level grappler.

I has a fabulous evening with my female team mates but I know there has been debates over the whole main card being draws. My opinion is that often submission only doesn’t always create the same opening. You don’t have to worry about giving up the sweep or being in a “bad” position as your not giving up position meaning you can focus on staying safe and reworking your game. The pressure of points sometimes create more reactions and windows of opportunity. However if you have points you can also have rules playing or stalling! The reality is the format regardless of the results enable us to some great grappling! You can still catch the PPV card until  the 16th April via the Polaris website and make your own mind up so no excuses – don’t miss out!

[Photo credit: Meerkatsu & James Nardone (who was there!)]