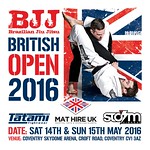 The British Open is one of only a couple of competitions that have a special place in my BJJ heart. For starters it is the only competition I have done every year since I started competing. Plus if I’m honest  it has always been a bit of a punctuation point and a reflection on where I am in my BJJ life.

Anyway before I reminisce too much; this year we yet again had a fantastic entry with over 100 adult women entered and 8 in my category of adult blue belt middleweight. Unlike IBJJF events there is no masters divisions for women so I was stepping down to join the youngsters lol!  The lack of masters did however guarantee a host of other tough girls and several women I had not yet had the pleasure of stepping on the mat against!

My hubby pulled out at the last minute due to a chest infection which had been bothering him for the last couple of days (and had been interrupting my sleep!)  but I wasn’t too worried competition wise as I was with two of my female Factory team mates (Sophie & Sarah) as well as some of the guys. Plus with so many people competing there is always a host of friendly faces from around the UK. In fact on of the nicest things about this year was that the Manchester based gyms that were competing pretty much set up based together so it was nice to catch up with guys from Stealth, Lucio Sergio and Union BJJ and speaks volumes about the Manchester BJJ scene. 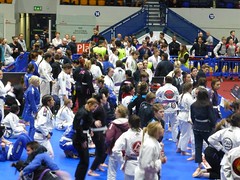 In my first round I drew a very tall and strong opponent from GB Bristol. I would love to give you a blow by blow account of the Match but I can’t really remember it! I remember have a couple of passing attempts and being stopped by the referee just as I was starting to work my turtle attack. Disappointingly it wasn’t classed as a secured position so I was restarted from standing but with 2 advantages from the pass attempts. I did secure the takedown this time but found myself getting swept from her closed guard which resulted in a host of tricky positions including deep half guard with her knee on top of my throat! A near passing attempt saw me stuck in turtle with 1 advantage up which other than a couple of “sweep” attacks is how the match finished. Although some how she did manage to cut / graze the side my nose. She was very apologetic about it but I was more worried about the blood on the mats than myself! 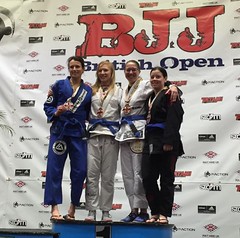 The semi final was against a tough girl from Roger Gracie Academy who I knew had won last year title. I was happy with my stand-up and grip work but she jumped guard really well and it was clear she loved playing in her closed guard. Despite managing to defend her initial plan to take my back she switched to a combo of triangle and arm bar attacks. With just over two minutes on the clock she finally got the triangle she had been trying for. I’ll be honest I was torn on my performance in that match. I did some good BJJ and defence but on the flipside I didn’t manage to impose my game how I had wanted to in either match. But overall I was happy to take away the bronze medal in what is a respected and tough competition.

Moving forward I have a few technical points I want to cover with my coach in the next few weeks. Nothing major just covering were I wasn’t happy with my choices or where I felt I need some polish.

I am also revisiting my diet and how much conditioning work I can fit into my programme. Physically I look good in my division but despite working hard on diet control (and actually making sure I ate enough) I found myself again dropping to the lighter side of my division again and giving away a little bit more weight than I needed to. So I am going to try over the next few weeks to bulk up (in a good way) and to see if I can use it as an opportunity to make some strength gains. I’m sure I may be blogging about that in the future once I’ve worked out what I’m doing!

In terms of competition planning I’ve already entered the next one! The IBJJF British Nationals in London next month where I will back in the Masters division.  It will be my final competition prep before I head into training for the IBJJF World Masters in Las Vegas!