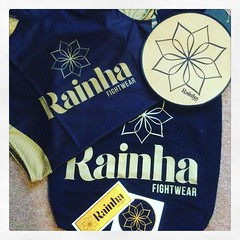 I first came across Rainha Fightwear through their Crowdfunding campaign to help support getting the business started. The company is a British Female Focused Fightwear company run by a lovely couple (Josie and Jon) but of course the real boss is their daughter Marlee! It really is a BJJ family business and I was more than happy to donate and support the brand which resulted in me receiving one of their first Rashguards as my funding reward. 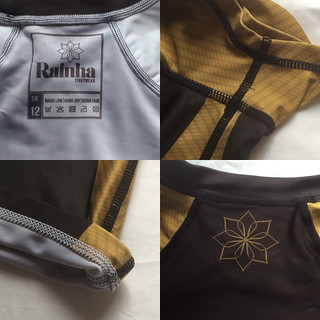 The key thing about this rashguard is that it isn’t a unisex cut. All of Rainha’s range is made by a female designer with female participants in mind. I was delighted when it finally came out of production and landed on my doorstep – along with a fabulous tote bag, stickers and patches which were all greatly appreciated!

Two things I instantly noticed was that it was a lovely rashguard similar in thickness to several high end BJJ brands on the market. The rashguard is full sublimated right down to the label inside the top so no worries about the design print coming off or being worn away by your gi or any annoying labels to rub or scratch. The rashguard has a triple lock style stitching throughout so it’s built to last and survive the pulling and tugging that comes with BJJ.

Now I noticed three key things about the fitting when I first put on this rash guard:-

So what about the performance? Well I wear all my rashguards are least three times before writing a review and wash them all in my normal gi wash (cool wash, spin and air dry on the radiator). I broke it in relatively gently with my normal Thursday gi and no gi classes.But to ensure a thorough testing I also put through both a competition class (the hardest session of the week) as well as a full day seminar at the weekend. What can say except that it performed really well! 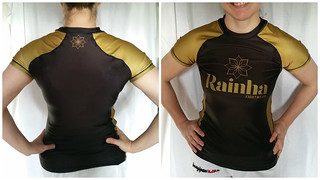 It fitted extremely well during all of the sessions and didn’t need to be pulled back down or adjusted in either gi or no-gi. It also didn’t feel particularly sweaty and did a good job of keeping my skin dry (ish)  no matter how much of a beetroot face I had at the end of a session and it didn’t have that horrible “peeling off” sensation at the end of the session. Now I put it through some pretty harsh testing and pretty much wore it under my gi the whole the time. The only negative was that they were some teeny tiny signs of bobbling at the end of testing. Nothing significant enough to be really noticeable on camera or unless you were specifically staring at my rashguard. Overall though it was nothing major to be worried about as the colour hadn’t faded  at all and it wasn’t showing any of the other abrasive issues you sometimes see with cheaper quality guards such as logos coming off etc.

Overall Rainha Fightwear appears to be a great addition to the UK female grappling market and definitely worth checking out if only for this flattering rashguard (I can’t stress how flattering it is enough!!) However they do have gi’s and other items in the pipeline and I certainly will be keep an eye out for what they do next. This rashguard currently markets for £36 and get be purchased direct from their website.