This is the second time the IBJFF have hosted a British Nationals tournament (adding to their Winter and Fall Opens) in London. I gave last years competition a miss for a variety of reasons but as it landed as an ideal preparation point for the World Masters this year I thought it would be a good competition to test out my new game plans as well as dealing with all the weigh in and gi check loveliness that an IBJJF competition brings. 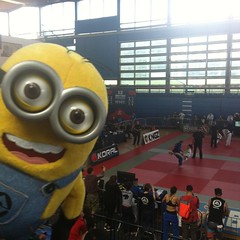 The competition was again at Crystal Palace which I’ll be honest is a venue that I hate for BJJ competitions. I simply find it too hot and uncomfortable. Plus as someone travelling in it’s just quite a difficult part of London to get to if your not local or driving. However luckily this year we have found a good Airbnb which solved some of the accommodation issues we’ve had in the past (their isn’t a lot of good local hotels). I’m not sure why the IBJJF don’t want to use the Copper Box Arena again as they did for the Winter Open in 2015 (other than cost) but the reality is that it was overall a much better location and venue – but anyhow with a lot of water in tow it was time to go and compete!

My category had a few changes during the weeks before the competition and ultimately ended up being a straight final. My opponent was another lovely and experience lady who also happened to be the World bronze medalist in my category last year! So although I had only one match it would still be a good test of my revised game planning and preparation. Plus it also guaranteed entry to the absolute so I could get extra fights through that! 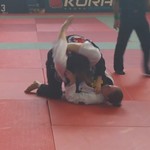 I’m not going to give a blow by blow account of my match because not only would it be boring but also because I can’t remember it all and my other half didn’t manage to film it! I would also love to say that on the day I pulled off exactly what I wanted to do but the reality was although I did in some aspect at I did make a few mistakes. Those combined with the briefing feeling that I might also be fighting the referee (some potentially missed points) resulted in me being down on points and the clock ticking down with me not in an A game position. Luckily thanks to a recent private lesson and a big chunk of hustling I managed to turn the match around to take the gold in the last minute!

I was asked by my team mates how I felt re the referee. My view was and still is that whilst it is annoying (especially when you do know the rules) people make mistakes and it happens. Its not deliberate or targeted against me so there is no point getting angry and letting it upset either my grappling or my day. Besides I guess it boils down to making sure everything is clean and dominant enough so there is no grey areas lol!

Although I will also admit getting slightly more passionate when an error was made during my team mates match that did cost him the result. Apparently my team mates favourite quote I made talking about it afterwards was “I wasn’t being negative just shouting factual accuracies regarding the IBJJF ruleset and the definition of a sweep” 😉 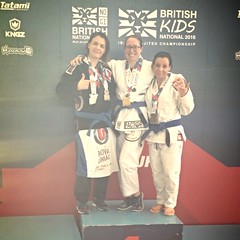 The absolute saw a double rematch as it ended up being a round robin. Again I won’t give all the details but both matches were completely different story to my category matches. One saw a more typical points win from myself whilst the final saw me score the submission via wrist lock. I had achieved my secret personal goal for the day (that I had only shared with my coach). Getting a submission win but also taking double gold!. The win was made even sweeter with my hubby also taking gold in his category thanks to a refs decision.

Despite it being London Pride weekend (and having some tempting invitations) there was no major partying on the Saturday evening. In part because of my team mates having no gi the next day. But a delicious amount of carbs and a couple beers meant I was still a happy grappler! 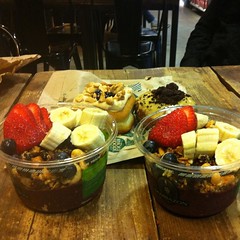 During the day I did briefly catch up with a number of BJJ friends which I always enjoy doing but The other positive of a London competition is the tourist opportunities. Sunday saw a trip not just to Whole Foods (Acai Bowls) but also a decent amount of shopping and having fun in the Sun before heading home.

There were a lot of other local competitions taking place around the time of the London Open which i think did effect the entries (especially when you add in the cost implications of IBJJF events). But at the end of the day its an IBJJF competition and you get what you pay for including good medals and a generally well run competition. Especially if you want to prepare and compete at one of their major events. Whilst London certainly isn’t my favourite event in the IBJJF calendar (especially whilst its still at crystal palace) it is definitely worth the experience and I’m sure this won’t be my last time participating!