I’ve resisted writing this blog for ages as it’s such a personal thing but it’s been triggered by my own experience and a few recent Facebook posts taking a whole range of approaches to them. I’ve seen people beat themselves up about them and refuse to go on the podium, post but admit its default, omit the details and just post the medal pics, celebrate about them and I have even seen a couple of blatant lies about medals!

People have a range of views and like most things it’s a spectrum which people can and do move along. When I first started out I was proud of my first default medal. It was my first medal full stop and it was in my first comp. So I was quite happy to celebrate getting on the mat and achieving that goal but I still acknowledged it was a default one.

As time has gone on I’ve drifted very much into the school of thought where I do the podium picture, I post it on Facebook and I accept the entry to the absolute (usually because I want revenge!)  but I do acknowledge what it is. I’m not particularly proud of them. The competition simply becomes another learning experience and those medals go in a box rather than on display at home.

I’m not going to fully go into the perceived right or wrong of the debate because the post would be incredibly long and because at the end of the day everyone’s journey / life is their own. Ultimately it’s your BJJ on the mats that counts (not the medals). It’s really all about personal choice and your own BJJ ethics. Plus as someone who is a lot wiser than me pointed out its a waste of energy getting really annoyed at something you can’t change when instead you can decide to let it go and use the energy at getting better at BJJ! Although the fact I’m writing this shows that I’m not that enlightened yet!

So instead I will leave you with a few reasons behind my own personal approach:

Respecting your opponent
No matter how much you hate losing and getting a default medal. Do the podium stuff. It’s about respecting your opponents. Although you don’t have to smile (disclaimer – I can’t do a mean face to save my life). Just grin and bare it whilst plotting your revenge in the future or even better in the absolute!

Don’t Lie
If you choose to post your podium pic or details of your day be honest and say what you’ve achieved. You don’t have to be negative as you may have achieved a lot of your goals or game plan so you may have a lot to be pleased with but just haven’t gotten the result. Simply say it’s a default medal or that despite doing X,Y,Z  or having a great match you didn’t get the result and lost the match. Do not just omit the fact / leave people to assume or even worse lie about it. At the end of the day I guess this about your own conscious but usually you are only inflating your own ego (nobody tends to remember the results of a random local competition or care past Monday morning). However, try to remember we live in an internet age – you will be found out particularly if it’s one of the larger competitions! 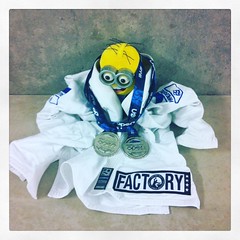 This is aimed at all those people who often have small brackets. So those guys at the extremes of weight categories and females etc. I remember having a chat to an old teammate who totally respected my efforts but ultimately commented how he wished he could have “easy” divisions like me! At the end of the day I have teammates who win 3 or 4 matches, display epic skills but still can come home empty handed as they lost in the quarter finals. I kind of feel that by not acknowledging default medals as defaults you’re doing three things.

I did a post about the value of medals when I first started blogging which was actually much about milestones and competition motivation. So I will leave this blog with a quote from how I ended that blog as it still really applies.

“Being on the podium is great fun and medals are great souvenirs but they are just that – souvenirs. Competitions are a snippet of your journey and provide milestones to remember. It’s easy to make them the be all and end all and the measurement of your BJJ when in reality BJJ is so much more. Your behaviour, learning and ultimately what you go onto do is what will define you as a practitioner and artist.”

3 thoughts on “Default Medals in BJJ”