I was delighted last week when I got my hands on a copy of Flow Jitsu to review before its release. Now before anyone thinks that I am going to launch in a full detailed technical breakdown I am going to stress that as a Blue Belt I am not going to be reviewing this from a particularly technical perspective. Instead i will be look it from perhaps a more crucial perspective of how easy it is follow, if it makes sense and if can I get a couple of sneaky moves into my game before it’s released and everyone else catches up! 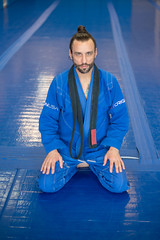 Flow Jitsu is the latest release from the Jiu Jitsu Brotherhood and as actually an instructional by black belt Mike Bidswell. Mike is the brains behind BJJ over 40 so I was rather excited that this was not just going to be potentially good content but also how shall I phrase this – stuff “masters” could use regardless of our attributes!

The tagline of the DVD is “Flow the fight, Don’t fight the flow” and in his introduction Mike explained how he believed in the importance of movement in BJJ and wanted to share techniques that were adaptable and work in a variety of situations but were also suitable for everyone. Also that that his aim was that every technique taught had the potential to chain together to ultimately create a flow. This statement really got my hopes up as my own learning style prefers to explore positions rather than learning single techniques in isolation. Also because we’ve all been there where an attack hasn’t worked and you end up stuck or in a bad position. Being shown next steps that aren’t necessary escapes but keep the pressure on is exactly what I like to hear!

I’m not going to go through what is in every chapter both as that would not only give everything away but because I also wouldn’t be able to do all the technical details justice! So I will focus on a couple of chapters from my own perspective.

Americana Set-ups (because I actually really like them)
This starts as one of those “but I’ve seen this” type of moments with a basic set up from the mount. However from the start he is adding small technical details to help you increase its success rating. He then moves into head and arm choke options with a knee on belly and a wristlock which some people may describe as nasty or vicious but in my mind was simply “oooh preeeety” which as anyone who has watched me in class can attest is a high compliment!

Americana to Peek-a-Boo (of course any technique named Peek-a-Boo got my attention!)
This was a natural chain to the chapter before and featured using the americana as bait. In particular luring your opponent into an arm wrap leading into a bow and arrow choke. He then moved from a defense attempt to the arm bar which if i’m honest had me seriously wondering why I hadn’t spotted that option before! (but hey that’s the joy of learning and not being obsessed with the original finish!). I also really loved the bicep slice option from the arm bar defense but I might have to wait a few years to play with that (it’s only IBJJF legal at Brown belt and above). Oh and if you’re wondering what peek-a-boo is then I’m not telling! You’ll have to watch yourself lol!

A special mention also has to also go to the guard lapel attacks chapter simply for a couple of small technical points he gave. “Slice and Dice” is definitely stuck in my brain for the future 😉 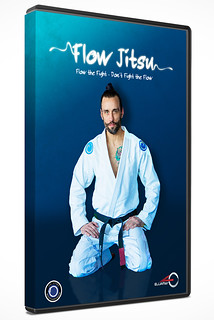 Camera Angles and Production
Overall it is a well produced instructional. The lighting was clear and consistent throughout the video with good sound quality. There is just the odd zoom or pan to help show the techniques in clearer detail which I appreciated.

However, the lack of chapter section on the download is a bit of pain as it makes it difficult to skip to the parts you want to watch. Naturally you’re going to watch it all! But life does get in the way (and you do need to go train!) so being able to watch and skip between chapters not only makes it easier to digest but also help when you want to review parts of it.

Teaching Style
The teaching set up is very clear with a clean blue matted gym and Mike and his training partner wearing white and black gi’s respectfully. This creates a nice contrast through the video with no arms or grips merging into one block of gi colour. Mike’s nickname in BJJ is “spider ninja” so throughout the video he does refer to the viewer as ninjas. Personally I like that. It’s gender neutral and it sounded really natural plus who doesn’t like learning “ninja stuff”! All the techniques are repeated roughly 3 or 4 times each with Mike explaining as he does them. I tend to like to move around a technique during class partially due to my shortsightedness but also to make sure I catch everything. You can’t do that with a DVD but between Mike moving and the camera zooming I didn’t feel I missed any details.

The million dollar question – Was it useful?
Well I’ve pretty much treated the first viewing of this DVD like going to a seminar. If you catch 1-2 things for your game then it was money well spent. And in the case of this instructional yes I did pick up a couple of things I’m definitely going to try as well as a couple of things to watch out for. It usually takes me 2 weeks on average to start hitting new moves and to get them to settle in after some drilling so fingers crossed. Plus the added bonus is unlike a seminar I can revisit this time and time again and see what I missing or pick something else up!

In terms of his initial promise / introduction Mike really did chain every move together and produce a beautiful spider web of “what if’s” mixing submissions, sweeps, escapes and counters. The instructional had some really beautiful jiu jitsu and the thing I loved most right since my early sessions – that sensation of linking movements together. I’ll be honest I’m a blue belt so my jitsu movement chains are rusty and occasionally a little clunky but I appreciated the concepts I was being shown and got a couple of good techniques to try. So overall I found it an enjoyable instructional and can now defiantely add Mike onto the list of seminars / classes I’d love to attend!

I am sure a higher level belt would watch this and see much more technical details and finesse to explore and probably could start utilising more of the concepts quicker but that the same with most things! Overall no matter your belt level I think this is an instructional you could get something from.

Flow Jitsu is available worldwide as a digital download from the Jiu Jitsu Brotherhood website and costs £37 ($49.95 for my US based readers)