Last year as a pretty new blue belt I ventured out to the World Masters in Vegas and obviously blogged about it all on here! Regular readers of my blog will know a lot happened since the worlds last year (which was actually my first competition abroad) including travelling to a few competitions and having some reasonable performances. I’ve also had a great year training at Factory BJJ so headed out this year feeling that I definitely could improve on last years performance.

Thanks to British Airways my plans for LA didn’t exactly go to plan with us arriving over 24 hours later than planned. As before I spent the week training at the Garage with both Chris and Melissa Hauteur. With both of them and several other guys prepping for the worlds it was a perfect effort with some great rolls and last minute tips! 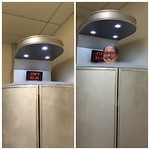 As part of our prehab we also had a trip to Beach City Cryotherapy for some compression massage and a cryotherapy session. The compression massage isn’t something I’d do regularly but if I’m honest I think it did help with fluid retention from the flight as I did lose 1kg the day after the session. Cryotherapy on the other hand is something I’m going to look into. I’ve had several niggles and the session left me feeling great. I’d definitely recommend it.

We learnt from last years trip to Vegas and scheduled to leave Redondo later than last year and we actually drove to Vegas this time (well hubby drove and I did the playlist!). The big difference to the competition this year was that there was a lot more Brits entered! In 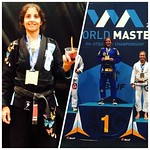 Vegas I got to meet up with my team mate Aaron, several of Pete’s team mates as well as some female friends including Leoni, Louise and Jolie. it was also great to catch up with a host of lovely ladies from my previous adventures. Thursday was spent scoping out the venue as well as having the pleasure of watching both Melissa and Leoni take gold. I was so pleased to be there for both of these fabulous ladies.

Friday was the big day. Luckily I was up first although this meant my hubby would be busy warming up so couldn’t watch my matches it also meant I didn’t have the stress of cheering him first.

Plus I had Melissa in my corner looking after me and keeping me calm. As usual I won’t go into all the details but my division ended up a bit of a mess with multiple disqualifications (for reasons unknown) but eventually it was my turn to compete. The final could at best be described as aggressive, heated, tough and scrappy but ultimately I did it. Thanks to keeping a cool head, a sweep, a couple of passing attempts and a solid defensive game my hand was raised and I became a world champion!

I then had the pleasure of watching my team mate Aaron battle to take a well earned a Silver (losing the final by refs decision) and my hubby win his first match by submission and narrowly miss the podium by an advantage (I seriously lost my voice during that match!)

I still felt that I had something to prove as my category wasn’t my best jiu Jitsu so I obviously entered the absolute. I was lucky enough to make it to the semifinals to take bronze. However I was much happier for doing it as I felt I had fought much better throughout, played more of my game and showed I definitely deserved to be on the podium. I also had the pleasure of watching my semi final opponent not only get her second gold but her purple belt on the podium too. 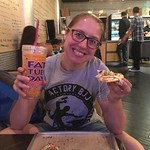 Following comp my main priority was eating! I had a great last few days in Vegas and Redondo including getting back on the mats. There is obviously a host of things that happened that will either remain a British Team secret or I may write about at a later date but ultimately I had an amazing trip both in terms of my jits but also as a holiday with my hubby.

Now I’m back home if I’m honest everything still hasn’t really sunk in. I’m very much more comfortable being an underdog and have never been one that people have expected to win gold so whilst I’ve loved my moment in the spotlight it’s felt really odd! But now it’s time to refocus as ultimately blue belt matches only help prepare you for purple belt ones and I’ve still got a lot to work on. So I’ve got my to do lists and I’m sure my coaches have things too so it’s now simply time to debrief, plan and plot the next adventure!