We’ve all seen various comments and memes essentially putting down or joking about students who have come from other martials arts. These memes brought to my mind two potentially useful discussions. One is regarding the importance of having a beginner’s mind-set and being open to learning new skills (which I may cover another day) and the other is being about people being dismissive of students past experiences and treat all new students the same. 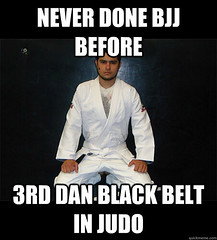 Some coaches might justify dismissing new students past experiences due to their own experience with other students (they said X,Y,Z but they weren’t that good at BJJ), that they don’t believe it’s relevant or simply because they don’t actually ask and get to know their new students that well to find out! Now obviously there are some previous sports experiences that have obvious transferable skills such as Judo and Wrestling (which is why the IBJJF has rules – page 38 number 5.5). But also sports like traditional jiu jitsu which utalises grappling (throwing, holds, joint locks, strangles – sound familiar?) as well as striking and weaponry. So what about other sports?

My academic background is sports science and one of my previous jobs involved teaching coach education (particularly the “hows” of coaching). It was this experience that triggered my interest in writing this blog.  One of the key things we taught early on to new coaches was the concept that an athlete had three different ages which should all be considered when looking at training and development which I think really helps with this discussion. These are chronological, biological and training.

Chronological Age – Simply your actual age based on your date of birth. The part that from a BJJ perspective that makes you a juvenile,  adult or an master competitor. Although I’m being a little bit flippant as it really should be ignored that much as obviously there are physiological changes linked to age which will reflect training planning and the recovery needs (yup def a whole other blog there!) 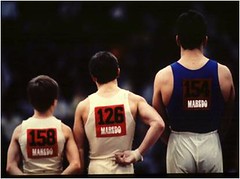 Biological Age – This isn’t that relevant to adults but one that is definitely relevant to anyone working with younger athletes. It’s your age based on your stage of child and adolescent development. Children can have the same chronological age, but have vastly different biological ages.  Think about the fourteen year old that look at least eighteen, is taller than you with a beard compared to the rooster weight male of the same age where it appears his voice hasn’t yet dropped.

Training Age
This is the part where your previous experience comes in and it usually considers 3 things:-

Admittedly, calculating someone’s training age is not an exact science as it does not account for the quality of their experience.  Fifteen years of bad training is not automatically better than five years of good training.  Training age also does not quantify the interplay between the different factors that can affect training age.  Someone who has spent their life working as a builder and never formally “worked out” may have physical tools beyond someone with formal training. Regardless we can still make appropriate qualitative adjustments with this knowledge. Someone who has been active in another sport may have an element of athleticism or conditioning which means they may be able to handle training a complete beginner may not. Similarly depending on the sport they may also have a range of transferable skills.

So as you can see a good BJJ coach shouldn’t just dismiss an athlete’s previous experience. I believe they should acknowledge it and use it to shape that athletes progression. Whilst coaches don’t always want to hear about your past sporting glories constantly they may be able to use your experience to help you identify anchors for techniques or to give them an insight to help push you further as an individual athlete. With more and more athletes being attracted to BJJ from other sports it’s something that will become increasingly common and something coaches and instructors will deal with more frequently.