As I mentioned in one of my previous blogs I entered the British Masters Judo Championships as a way to keep me motivated for training after the World Masters. However there is another reason which is that I am currently a 1st Kyu in Judo (Brown belt) and in order obtain my 1st Dan (black belt) then I need to gain points towards my grading (basically by winning matches against equal or higher grades). This competition is one of the best opportunities to do this as there is always a good entry and as the name suggests everyone is at least over 30. I competed in it last year and although I was beaten in all my matches then (which were against black belts) it was a great confidence boost and learning curve so I was really looking forward to this year’s competition in Edinburgh. 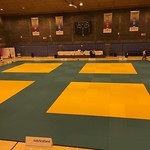 The British Masters is a level 4 competition which means it is run to the international rule set including formal weigh ins and video referee feedback. For the BJJ people reading this it’s essentially the highest level domestic competition I can do as a Master so on reflection it is jumping into the deep end slightly! Now I do know the Judo competition rules pretty well despite joking about it but it’s still all a little alien and out of my comfort zone. Even the venue set up looked a little strange as last time I was at this venue I was refereeing a BJJ competition I mean they had mats but come on no acai stall!!! 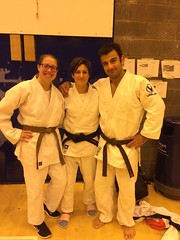 However, I wasn’t competing alone in Edinburgh and had the pleasure of taking this trip both with my judo coach Sophie as well as my good friend and original BJJ coach Liam as well as a bunch of Judoka’s who I’ve met through my visits to Bacup Judo Club including the head honcho Brian Moore (Sophie’s coach) . So I knew I had great moral and technical support for the competition. 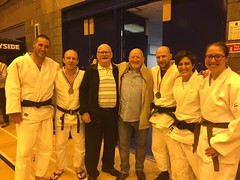 One of the big difference between Judo and BJJ is the weigh in’s. Your weight doesn’t include your gi for a start and at a level 4 competition you have an option of a night before or an early morning weigh in (not 10 minutes before you fight). Your even taken into a separate room with same sex officials so you can weigh in basically naked if you want to. For Judo my bracket is under 70Kg which is even higher than my BJJ category so I’m always on the light side (I weighed in nearly 4kg under despite not dieting at all for this comp!). But due to arriving in the early evening and staying across the road from the venue we took advantage of the night before weigh in to get it out of the way and to have one less thing to do in the morning. 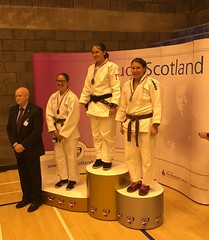 Onto the competition, well my first confession is that i was unbelievably nervous; and by that I mean visibly shaking nervous which really isn’t normal for me. Despite my BJJ adventures I was out of my comfort zone and if I’m honest I was also putting a little bit of pressure on myself to get at least one win! What actually happened is that I made a really bad decision in my first match and basically threw myself under her in a sloppy attempt and gave her the ippon. My second match was better but she was just much more experienced than me and eventually got the ippon to win, leaving me with default bronze. Luckily I heard about a possible absolute division so I did what any disappointed grappler does and signed up straight away! I was totally glad I did as I ended up in a lightweight absolute with four lovely black belt ladies. Although I still made some tactical mistakes and lost my matches I did manage to show off some of my skills and generally feel much better about my Judo! 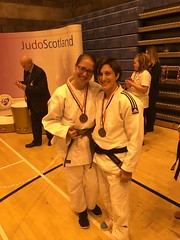 It took me nearly a year of competing as a BJJ white belt to get over my nerves and win a medal so perhaps it was ambitious to expect to win at a high level comp but hey a girls got to have goals. The reality is I can hang at this level just not necessarily win yet. I was pleased with my newaza and got a lot of what I had been working on. I’ve just got to do it quicker and not at a BJJ pace! I also defended attacks much better than I have done in the past and I did some good grip fighting. I just need to keep working on my throws and particularly getting my footwork that bit more slicker and confident. That and a couple more comps to improve my tactical awareness. I definitely know more judo than I did when I competed a year ago, I just don’t always know the right time to use it!

Anyhow with the competition over with I had the opportunity to see some of the city as the schedule was in our favour enabling a afternoon finish! Now with great friends accompanying me I couldn’t have anything but a great time and I did enjoy the chance to be a tourist for the day. Now a minion never divulges the full details there was plenty of food, drinkies and giggles to ensure we left Edinburgh the next day with not just post comp aches and a slightly sore head but also a happy heart and some great memories!

The reality is competing in judo might not be for everyone. It is faster paced and I find the training is harder on my body but it is a great experience. Yes there are things that are annoying for a BJJ-er but on the flip side the focus it has given me on my grips, footwork and imposing my game can only help with my BJJ in the long run. Judo has a range of coloured belt competitions as well as a growing masters scene so I would recommend anyone vaguely interested to give it a go! I’m already planning possible competitions to fit in around my BJJ for the new year!