As regular readers know that I love connecting my competitions with the chance to travel. So with a need to get back into training seriously and to shake off my competition rust I decided to enter the IBJJF Madrid Open. As usually I wasn’t on my travels alone so last weekend myself and my hubby headed off to Spain!

Due to life being really hectic off the mats at the moment we had to change our plans slightly resulting in this being a very much fly in, roll about and fly out affair with my plans for sightseeing very much being on the back burner. However I was still looking forward for a couple of days away plus the weather was still a lot warmer than the UK! 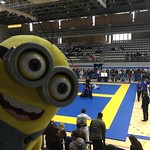 We were really lucky with our hotel accommodation as not only was it a short walk to the venue (about a mile) but it was definitely slightly posher than a premier inn and was actually in a great big shopping centre. Great for food as well as a walkabout on the evening. The venue for the competition itself was in an ok location but wasn’t one of my favourites. I’ve been at worse venues but the fact you had to go to reception for loo roll gives you a general idea of the changing facilities!

My hubby had a great competition with a straight final both in his category and again with the same person in the absolute enabling him to take double gold. Mine was slightly less successful. My opponent had change categories on check day leaving me a default gold. As always I entered the absolute (I’d come to fight) and was matched with a strong medium heavy weight.

Despite my best effor

ts I lost by two points leaving me with a default bronze medal. I’ll be honest I was simply frustrated as I left the mats. I felt that I wasn’t outclassed I just should have done one or two things differently. But things are always better the next day and on reflection I was really pleased with my performance. I had some great guard retention and I think I worked my sweep game reasonably well. In fact let’s be honest the fact I’m using the phrases “guard retention and sweeping” in reference to my BJJ is something that wouldn’t have really happened a year ago! It was definitely a “learning day”!

As always my BJJ is about the social side of things. It was great to chat to one of the female lightweights after the absolutes and Pete got on really well his opponent meaning that he has another frenemy at the Euros. From the Brit side of things we were lucky enough to bump into the lovely Gret Zoeller at the airport so we had the added bonus of some great support at the competition both in terms of coaching but also translation services and good company!. It was also great to spot and chat to a couple of the grapplers we know from the UK circuit.

Overall Madrid wasn’t my favourite IBJJF competition but cheap airfares and accommodation combined with a city that I still have not yet fully explored means that this year’s competition probably won’t be my last! But for now it’s a case of getting back to training as well as looking forward to my Birthday, Christmas and my next BJJ travels, a little competition called the Europeans!