At the start of this year, I decided to start a simple experiment and that was to log how much training I did. I made a basic spreadsheet and logged what training I did and my mat hours. Now I’ll be honest I was probably conservative as I was often at the gym longer than the amount I stated but I tried to only measure the training / grappling time and not the stretching, chatting and catching up part (although this is equally important!). This blog (and part 2) is about what why I did it and what I discovered.

So why did I do it? Well, I’m intrigued by the whole part-time grappler concept. I blame the original Part Time Grappler (my friend Liam) as my first coach for instilling the concept in me from the very start!  But the reality is also that despite in my own imagination it’s what I actually am and it’s all I will ever be without some type of huge lottery win. Plus I have a sedentary office based job so there is no sneaky work based or related fitness training to squeeze in either. So it was time to take ownership of my part-time status and work out if I actually did maximize my opportunities to train and if there was any humanly possible way to squeeze in more? 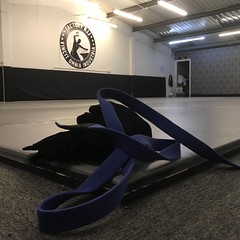 Now according to my magic little spreadsheet, I managed 216 mat sessions (BJJ and Judo), trained around 5½ hours a week on average over around 3½ sessions a week. I’ll be honest it was lower than I expected it to be as I actually try to squeeze in between 7-8hrs a week. But it showed how work, life and my body got in the way over the course of a year! Even at my peak before the worlds, I was only able to squeeze in around 8 hours a week in for only a couple of months. I guess it’s not too bad an average and I do expect a few people will be envious but in the grand scheme of things when compared to full-time athletes it’s really not that much time.

Using an article from Jiu Jitsu Magazine re part-time training. It states that BJ Penn is the fastest legitimate black belt in BJJ history (3 years) so assuming he trained full time (6hrs a day, 5 days a week) that’s approx 4680 hours to black belt.

So using this maths if I maintain my average of just over 285 hours a year that means it will take me at least another 14 years to each black belt (i’ve already done 3 years to get this far). This is assuming I have the same athletic abilities as him (which I doubt) and it doesn’t take into account aging, any injuries and my own learning ability.

So at the end of this part, I’ve learned that life really does get in the way, competitions seem to help focus my training but that I am still far from being a full-time athlete. So unsurprising I still have a lot of mat hours to put in and a potentially cracking goal for in 50’s. In part 2 I’ll dig a bit deeper into the main topics that affected my training hours over the year.