Competition season is getting into full flow locally and I am frequently seeing a host of people stepping onto the mats for their first competition who are simply unprepared. Not necessarily in terms of their BJJ techniques but due to a whole list of things that people haven’t told them or they just haven’t thought about. So it’s time to list some of the random and the “so obvious that you may forget” things that you need to know about when you’re about to starting to compete!

Are you Ready? – Harder Rolling
Before entering your first competition. Speak to your coach, attend a competition class and make sure that you have had some hard, high intensity rolls. The ones where you’re definitely the nail and you’re not always sure what’s happening other than your desire to survive the 5 minutes. Only if you’re comfortable with that then should you enter your first competition. My biggest fear as a referee is when I see a look of shock on a new white belts face after they’ve had their first match. 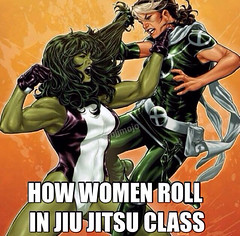 It usually means the second match won’t go so well if they get one and I’m always worried that it will put them off BJJ or at least BJJ competition afterwards.

Rolling with males doesn’t make you tough – it makes you normal!
Linked to that for the females. If anyone says to you that as a female because you roll with guys you’re going to be awesome then given them a little slap lol! We all roll with guys and are outnumbered by them everyday. It doesn’t give you a mythical advantage. Also we move differently and if i’m honest we can actually be more aggressive in competition than some of the males. It’s one of the reasons female matches can be really entertaining as good technique, movement and the will to impose their game can lead to some great matches! If you have never rolled against another female. Find an open mat or seminar or visit another club and do it!

Tapping
This has to be covered from two perspectives. Firstly be prepared to tap. Your 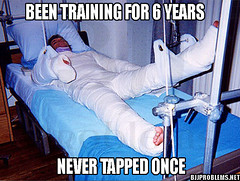 Secondly if you are putting on a submission don’t let go until the referee stops you. That doesn’t mean keep cranking but don’t give up your position. Opponents can be sneaky and stubborn. You may have to push the submission a little further than you’re used to in training to get the finish. Similarly you may feel a “ghost tap” where your opponent half tap / half grips you in the hope you let go. My favourite was the opponent who stroked me twice in a fake tap attempt whilst in an arm bar.

Hygiene
Just because you’re at a competition doesn’t mean the rules go out the window! No shoes on the mat but most importantly shoes on when you’re elsewhere! Do you really want to be in a toilet barefoot and share those germs onto the mat? Also bare in mind your opponents may not be as considerate so consider wipes, hand sanitizer or a barrier foam to help protect yourself from mat cooties!

Linked to this girls if it’s an IBJJF comp or similar then pack a spare gi. If some inconsiderate female gets make-up on your gi then you may be made to change it. If you haven’t a spare that’s a potential DQ for not having a clean enough gi. Realistically there is no reason to wear makeup at a BJJ competition (as I have blogged about before!) but there will be people who do it!

Toilet Roll
I’m going to brief on this. Most competition venue toilets are pretty gross.

Most run out of toilet roll early on (even the female ones). Avoid one of those moments by simply packing some of your own! I particularly remember competing in Madrid where not a single toilet had any. Luckily I had a friendly black belt who explained why and how to ask at reception for some! But just save yourself the stress lol!

Sensible and Spare Undies
If you haven’t twigged already thongs and skimpy undies are not designed for grappling. In fact thongs are actually illegal under IBJJF rules due to safety (although they never check to my knowledge). Just make sure you wear something sensible. I always wear booty lyrca shorts over my undies as you can’t always ensure changing rooms etc and in case my gi pants fall down during comp (no blushes). However, not all my opponent have been so smart. You don’t want to be the white belt who flashes her red spotty undies to the crowd and is nicknamed that by random grapplers for quite a while! The spare pair is just for comfort post competition – it’s easy to forget them but you’ll thank me for it!

As I mentioned at the start this blog wasn’t designed to cover the obvious things like making weight, being on time and warming up but some of the more obscure things I’ve noticed. Let me know if any of these are particular helpful, if there are any you disagree with or if there are any more to be added to the list?

2 thoughts on “Entering Competition – The things nobody tells you….”