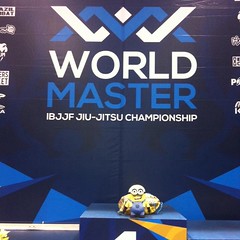 In BJJ females usually can only compete in BJJ in either adult or masters 1. There are a couple of key exceptions such as the World, European or Brazilian Masters but unlike our male counterparts we often have to drop down age groups or not compete. Now some people (usually those on the cusp of being masters athletes or new masters aged athletes!) argue that there is no point to masters at such an early age. We should just compete with the adults and that some people just go to master’s for small categories and easier medals (yes it’s been said!) So this article covers one simple discussion. Do female masters categories really matter?

Now there has been a range of research projects looking at the age of peak performance in a range of sport. Nothing robust has been done in BJJ but the age range for peak sporting performance is generally accepted to be at some point in their 20’s. The average being around 26yrs (1). Now it is true that the peak performance age of females has been rising over the past 20-30 years but it has in most sports fallen in line with them men. So it could be argued that this increase isn’t due to our biology but more the changes in society and the growing participation of women in sport (2).

So with the understanding that performance does decline with age what element decline and how does it affect BJJ? 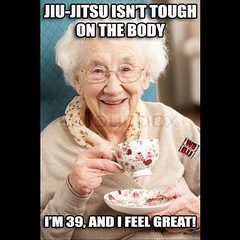 First things first, the research I’ve found in performance and aging hasn’t found a significant difference between the genders. In fact I have found research that claims the decline is parallel between both males and females. So this means that the aspects in this blog apply equally to both men and women (3).

Strength
From my reading strength peaks around 25 years of age, plateaus through 35 or 40 years of age, and then shows an accelerating decline, with 25% loss of peak force by the age of 65 years (4). At the age of 50 both elite athletes and the general population will experience age related muscle loss (5). Now whilst muscle loss main ultimately be inevitable numerous studies have shown that it can be limited and delayed simply by exercising. Its is really a case of using it losing it!

Reaction Time & Cognitive Ability
Being able to react and respond appropriate is a key skill in BJJ. After 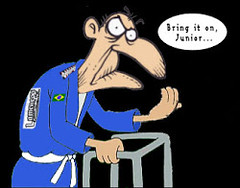 studying 3,305 people ages 16 to 44, researchers found that the brain’s response time begins to decline at age 24. The descent is a slow, but nonetheless, steady one.  Although to finish on a positive. The same research on reaction time also found the subjects compensated with improved strategy and efficiency. This is supported by further research that whilst physiological ability tends to wane especially after the age of 30, cognitive ability has been shown to increase in healthy individuals until at least age sixty. So whilst you may not be stronger or faster, you’re almost certainly wiser and potentially more tricker on the mat – definitely an example of brains v brawn! (6)

Flexibility
Flexibility can change with age. Tissues around the joints can thicken and stiffen and frequently we have cartilage reduction which doesn’t help our joints move as freely as they did in the past (7). But the good news is that flexibility is one of the few aspects that doesn’t have to decline as significantly. It really is a case of “use it or lose it!”. But to keep it we do have to work at it and remember to include flexibility work and stretching into our programmes (I know I don’t do enough) but it really is useful both for long term maintenance but also injury prevention and maintenance (8).

Cardio and Endurance
You may have tried to calculate your maximum heart rate and seen the rough guide of 220 beats per minute – minus your age. There is a reason for this and that is your maximum heart rate declines with age. Now this does vary between people especially those who train versus a coach potato but does also mean that your Vo2 maximum (your maximal ability to utilize oxygen) also declines with age.  VO2max tends to decline by about 10% per decade after the age of 30. Athletes who continue to compete and train hard can reduce the drop by about half, to 5% per decade after the age of 30. The lower the Vo2 max the less effective we are at getting oxygen to the muscles and the less effective our cardio endurance is. (9) 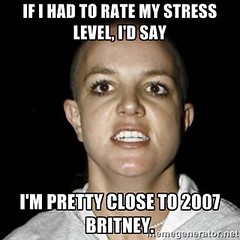 The reality is that an older athlete is more likely to experience injuries and long term niggles. This might be linked to the fact that they are a beginner when they are not in their physical prime. Or simply because of them having more mat time than their younger counterparts and the law of averages creating them more niggles but it is a fact that affects older athletes. Additionally generally speaking older athletes have more life responsibilities including caring responsibilities. Additional stresses can cause an increase in cortisol levels which in turn can effect your immune system, break down muscle tissue and increase the risk of injury (10). 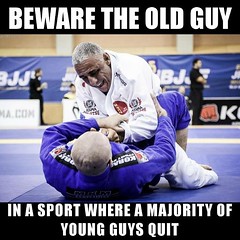 exceptions to every rule the reality is that ultimately masters categories do matter. We may just have to admit that ageing may affect our abilities to train and compete with our younger teams as much as we’d like to!

But its not all bleak, all the research indicated that through training smart (good recovery, warm up and taking care of injuries) there is no reasons that we cannot have grappling careers into even older age and in the process limit some of the physical affects of ageing and have an improved quality of life which is certainly a reason to keep rolling!

References / Sources / Further Reading
(1) – Exponential growth combined with exponential decline explains lifetime performance evolution in individual and human species
(2) – A rise in peak performance age in female athletes.
(3) – Effects of age and gender on physical performance
(4) – Ageing and Exercise
(5) – The Aging of Elite Male Athletes: Age-Related Changes in Performance and Skeletal Muscle Structure and Function
(6) – Over the Hill at 24: Persistent Age-Related Cognitive-Motor Decline in Reaction Times in an Ecologically Valid Video Game Task Begins in Early Adulthood
(7) – Age Affecting Flexibility
(8) – Use It Or Lose It: The Third Pillar Of Fitness – Flexibility
(9) – How does aging affect athletic performance?
(10) – How Cortisol Effects Performance

3 thoughts on “Do We Really Need Masters Categories?”