As most of my readers know I’m currently a master 2 athlete (late 30’s) and this means that I very rarely get the chance to compete in my age category. Male readers may wonder why as they can compete at a variety of age groups at any IBJJF competition as well as domestically. But at present for women to compete at anything other than adults or masters 1 there are only three competitions in the world. The Brazilian Masters International, the World Masters and now the European International Masters which was held last week for the first time this year in Barcelona. Obviously this meant my hubby, me and a bunch of friends from across the UK had to set off on an adventure!

Travel to Barcelona is relatively easy from where I live in the UK. Daily flights means it’s actually almost as easy to get to Barcelona as it is to travel to London. Although we did have a slight panic hours before departure, conversations to Airbnb in Barcelona sorting out our accommodation wasn’t the most relaxing start to the trip. But thanks to good customer service and a little bit of luck everything worked out actually really well. Our new host was only 10 minutes from the venue and a genuinely nice person who is definitely someone we’ll stay in touch with if we visit the city again. Definitely a case of some positive travel karma in action!

The venue for the competition is a slightly dated sports centre. But it’s only 15 minutes walk from the nearest metro and pretty accessible. 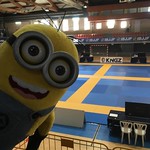 I was worried as I spied the swimming pool on my way in that it would be a little bit too hot and chlorine smelling (like Crystal Palace) but luckily it was reasonably well ventilated. Re the facilities there is a good cafe on site for water and essential snacks but building on my experience in Madrid and competition preparation I was extremely glad to have packed loo roll as again it was a rare commodity! The event is listed as a IBJJF 4 star event but essentially ran just like the regular one star international opens. I suspect this will change as the event grows but for anyone nervous about considering it then if you can do a London open then you won’t feel out of place or overwhelmed at this one!

The competition itself did not go the way I wanted. Life has been getting in the way of my BJJ a little recently (something I’ll blog about at a later date) and I felt a little bit more nervous / pressure going into the competition. I found my category a really frustrating experience where despite a lot of work and effort on my part I simply didn’t do anything wrong or get anything quite right! It resulted in a default medal by a single advantage. I have to admit I felt very Roger Gracie about that match!

We all had a long wait for the absolute. The competition was a round robin  in the first match a mistake in a passing attempt resulted in getting caught in a triangle which I couldn’t quite shake it off. 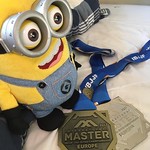 But on the positive in my second match I did get much tougher and more attacking opponent which gave me the chance to try some of my new game plan. There was a little bit of referee controversy which resulted in advantages costing me the match again. However I found myself being far from angry at the time as it was one of those matches that was close and we both wanted / deserved the win. Plus I’d also ended up fighting 6 minutes (despite Master matches only being 5 minutes) so whilst I was thrilled with my cardio I was also a little tired to argue! There were a lot of new / trainee referees at this competition and my last match was at 6:45pm (my first was 9:20am) so we’d all had had a long day and I know as a referee mistakes happen so I genuinely see it was one of those things.

On reflection I wasn’t outclassed by any of my opponents it was all about small margins of error than any major gaps or problems. Even the submission came from my mistake in an attempt to create movement rather than my opponent imposing her game! And as a few people also pointed out to me during my post comp grump that competition are merely snapshots in time and not a true reflection of ability!  It was good to get back on the mat and to find some clear areas to focus on for the future. 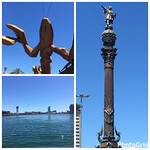 But back onto the even bigger positives! With competition out of the way it was time to explore Barcelona! On the Saturday night by the time we left the venue it was basically the metro and a restaurant with my hubby and team mate Aaron. Not very much of a party but very much the reality of jiu jitsu adventures! But the pizza and wine tasted good! 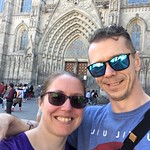 However I wasn’t flying home till Monday morning so Sunday was a different story. I have to say that Barcelona is a fabulous city. It has a great vibe to it so I had a fabulous Sunday enjoying the sun, sights and copious amounts of sweet treats. They really do have a fabulous range of ice cream! It really is a great city both as a tourist and to hang out with friends on an evening with food and some nice wine. The city really was the star of the trip and a definitely somewhere I want to visit again. 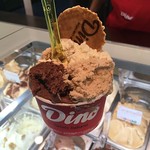 Overall as as a competition there was a few teething problems to sort out in terms of the event logistics. But it still is a great masters event with a good friendly vibe and a fantastic opportunity to catch up with friends and facebook friends from around the globe. That combined with my newfound love of Barcelona means that this is an event I will definitely go back to. Sunshine, Jiu Jitsu, friends and a ton of ice cream – what more excuse do you need for a weekend away!