Daniel Strauss (aka The Raspberry Ape) is well know in the UK Grappling scene and beyond thanks to his appearances at Tanko, Polaris (against AJ Agazarm) and his upcoming fight against Jake Shields. As well as competing at the Eddie Bravo Invitational. If that wasn’t enough he’s also the host of his own “Raspberry Ape Podcast” and has also made an epic appearance on UK Ninja Warrior!

I have previously attended a seminar where Daniel was teaching in the past and had a great time so when I discovered that his Butterfly Guard Seminar Tour would be stopping at my husband’s gym (Stealth BJJ) I decided it was time to dust off my no-gi gear and sneak along!Full disclaimer here in that I am not really known for my no-gi grappling but I was assured in the seminar blurb that this would be fully gi relevant. Plus anyone promising me a battle tested approach and a deeper understanding of butterfly entry, transitions and control has my full attention! Especially, as it has been a guard that I have had a love hate relationship with!

If you haven’t yet visited Stealth BJJ then it is definitely one of the gyms you need to visit on a trip to Manchester (after you’ve been to my gym Factory BJJ!). It has a rather large mat space with two matted rooms. The main room was filled with the usual mixture of friendly faces and around 30 grapplers.

I won’t be going into the full details of the seminar as it would kinda defeat the point of attending (and me trying to gain any technical advantage). Although calling it just a no-gi seminar would actually be under selling it. As Dan explained in his introduction he prefers teaching no gi so that everything can be seen more clearly and to strip the techniques back. “Stripped Back” is probably a good theme for the seminar as he stripped the butterfly guard right back to its basics and then added layer, upon layer of detail back onto it.

The session started with the basics of a good butterfly guard including body posture before moving into common entries (which I paid particular attention to and will not be sharing until I get a chance to play them!); before finishing with upper body control and sweeps.

Dan’s teaching style is very relaxed with the opportunity to ask questions throughout and he uses a range of people from the class as his grappling partners for demonstrations. Although a top tip is to volunteer first and early!

Dan has a very conceptual approach to his teaching so if you like to know the reasoning behind everything then you’ll be more than happy with this seminar. Although I do have to be honest that three hours was a long time for a seminar and by the end of it my brain was totally fried. Luckily my husband filmed the key bits of the seminar as I wouldn’t have had a chance of remember parts of it any other way! 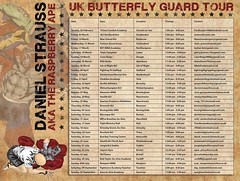 Dan is still doing several seminar around the UK as well as teaching at his usual gym (Mill Hill BJJ). If you get the opportunity attenda I’d certainly recommend it. Even if no gi isn’t your thing you’ll certainly come away with some great ideas and concepts.