I completed and blogged about my experiences at the IBJJF British Nationals last year. As this is the last IBJJF UK based competition prior to the World Masters it made to travel down and compete again this year! 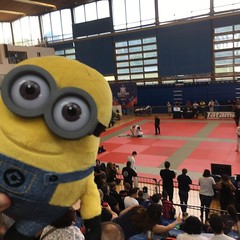 Entries for this competition were a bit of a slow burner but ended up with a busy adults division and female blue masters 1 had seven athletes in it including my division of 3 athletes. However, the size of the category shouldn’t mislead you as it contained several high-level competitors! It meant I was not only going to have a challenging category with the opportunities for rematches in an interesting absolute. All great testing for my World Masters Game Plan.

In term of the competition is was held yet again at Crystal Palace, it’s still a venue I hate (as mentioned in last years post) especially on a hot summers day as it is literally a sauna! This year’s weather made sure it was lovely and toasty! In fact, it was so hot that I skipped my usual competition rashguard and competed for the first time ever in a crop top! I actually spent most of the day in a crop top and shorts as it was far too hot to care about body image!

As always I wasn’t competing alone but had my husband as well as a group of Factory teammate including comp class partner Aaron and Adam my coach. As with every BJJ competition, it was great to catch up with a range of my southern and internationally based BJJ friends but especially my original coach Liam – it was a pleasure to have him in my corner again for the first time since white belt!

I’m not going to go through all the matches piece by piece as ultimately it was a default day and I was really disappointed with elements of my performance. There were clear and definite opportunities in all of my matches where I had the opportunity to capitalise but failed to take the opportunity and secure the points which would have turned the results in my favor. Yes, these are split seconds in time that also involve an element of luck as well as skill but they did haunt me after the match! “Could have, should have, would have” and all that!

On the positives importantly I was pain-free for the whole of the day and felt as “loose as a goose” during the warm-up for the first time in a while. I wasn’t submitted and I stayed in the match as I only conceded a couple of points (but it was all that was needed). More importantly, I kept my head in the game much better and felt happy to be out there on the mats. Plus I managed to get one new technique working and pulled an old friend of a technique out of the bag so realistically I have moved in the right direction since Barcelona.

We didn’t leave the venue till after 8 pm due my husband having a fabulous absolute (taking silver to add to his category gold) but after a quick shower we were soon in a local curry house eating more than I could manage and have a well-deserved beer (well I was! My teammates had no-gi the next day!). The rest of the weekend was spent enjoying London, catching up with family and not getting much rest (thank to hotel beds and fire alarms). But it was still an enjoyable BJJ adventure.

I have no doubt I will compete at the IBJJF London events again in the future as generally, they are great events to catch up with people at and slightly easier to get to than some of the European ones! But with the number of competitors (and this is one of their quieter entries) then it may be time to start looking for a new venue. Preferably one with air conditioning and nicer changing rooms! After all, London is a city with lots to do and great travel links including platform 9 3/4 to Hogwarts!

But for now, my focus is having a few day feasting and catching up with friends before focusing my training in my preparations for the World Masters.