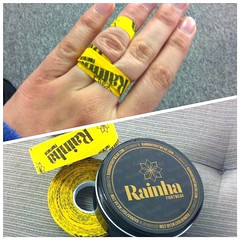 I’ve been asked a couple of times in the gym why I tape my fingers. The simple answer is that I have sprained a single finger on both hands previously. Each time was a freak accident linked to being tired and having my grip broken (either in Judo or BJJ training. Each time they really hurt and were sore for quite a while. They also left with slightly deformed fingers. Since it happened I’ve taped both of them to protect them from further injury. So with this in mind, I thought it was time to share my thoughts on hand care.

How to Tape Your Fingers
There are various ways to tape your fingers but these are three most common ways:-

What tape do I use?
For a long while tape was quite difficult to get hold of in the UK. You were left ordering over the internet or going to specialist rock climbing shops. I used to always stock up whilst on holiday in the states where it was available in most sports stores. But things are changing with a range being available on the market.

Grip Training and Finger Stretching – Now I’ll be honest I don’t do anything specific in terms of my grip strength or finger stretching. I find that a mixture of BJJ and Judo training combined with my weights program seems to cover most things. My hubby does like using grip trainers and fat grips as part of his weight program to help though and did a review of them a while ago.

Rehabilitation – Nobody likes doing rehab as let’s be honest it’s not the most fun thing on the planet and because it means admitting you’ve injured yourself! Combined with the fact that fingers are easyish to ignore then it’s very easy to neglect finger exercises. Rosi Sexton is well known within MMA and the UK grappling scene as an athlete but she’s also an Osteopath and has fixed me a couple of times! So here is a little video on finger exercises that you might find useful if you have sore digits.

Hand Balm – Using hand balm not only will help to heal the skin but also give your hands and fingers a mini massage which helps circulation. I use Badger Balm as my hand balm of choice. It’s organic and smells of wintergreen which if I’m honest reminds me slightly of a much more subtle Thai oil! But I also have a cheap generic supermarket hand cream in my desk at work for when I come into the office straight from lifting sessions in case my hands need a little bit of love!

Fish Oil Supplements
I may blog at a later date re the supplements I use but Fish Oil is one of them. Although it’s not about the amount of fish oil but the amount of EPA and DHA. There is a mixture of research re the optimal amount of EPA and DHA ranging from a minimum of 250mg through to 6g for muscle soreness.  The more you have in your diet the less you need to supplement. I don’t eat any fish so I take around 1000mg of fish oil with around 300mg of EPA/DHA. You won’t notice a drastic improvement in your fingers and joints but I’ve found that when I stop taking it aching fingers are one of the first things to return! So there might be something in it!

Hope you’ve found my tips useful but feel free to share anything you sure to look after those all important hands and fingers!

Cover Picture Credit – Liam Wandi (but it does feature my hand!)