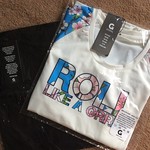 I’ll be honest I have had this rashguard reviewed and in my rotation for a while but just never for around to posting the review but now it’s time!

GRRRL is an American based company with a strong ethos of female empowerment and positive body image. I have had my eye on this rashie from them for over a year and ordered one from their USA store. As typical with these things they opened a UK store literally weeks later which makes it even more competitively priced if you do decide to buy one! 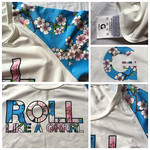 worry about cheaper products regarding whether it’s a false economy in terms of the quality especially when it’s a white design as these are particularly unforgiving when it comes to transparency and going see through.Straight out of the packet my fear dissolved. It is not my thickest rashguard but it is sturdy material making it perfect for the slightly warmer weather. It also did go see through at all when stretched and put on. I deliberately wore a pale colored sports bra on the first testing but by the end of testing, I was wearing my jet black ones underneath it with no problem, transparency or see thoroughness (yes it’s a random review point but if I think it about I am sure other women do too!) 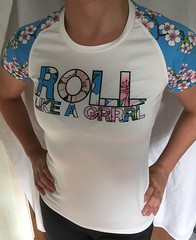 The top itself is fully sublimated and has the reinforced stitching etc where you would expect. There was only one standard label in it by that was on the side and didn’t cause a problem.. Fitting is a little bit more tricky than usual rashguards due to GRRLS unique sizing options which are around female names. I’m a size 12 approx in the UK and found the Kortney fitted well.

So what about the performance? Well, I wear all my rashguards are least three times before writing a review and wash them all in my normal gi wash (cool wash, spin and air dry on the radiator). I broke it in relatively gently with my normal Saturday class and open mat. 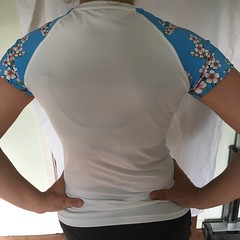 But to ensure a thorough testing I also put through both a hard competition class (the hardest session of the week) as well as a full day seminar at the weekend which I have to say was in a particularly warm gym. What can say except that it performed really well!

It fitted extremely well during all of the sessions and didn’t need to be pulled back down or adjusted. It also didn’t feel particularly sweaty and did a good job of keeping my skin dry (ish) no matter how much of a beetroot face I had at the end of a session. Despite being a predominantly white design it remained solid despite being more than slightly sweaty. 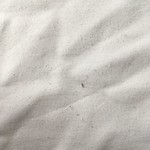 Now I put it through some pretty harsh testing and pretty much wore it under my gi the whole the time. Overall the printing and the logo stayed solid with no signs of damage but there was some slight bobbling of the main material although I firmly suspect this was due to wearing it under a gi and wasn’t obvious enough to be unsightly -you can only spot it on a close-up photograph.

I really like GRRRL as a brand and what it stands for. It potentially a great resource for women of all shapes and sizes looking for affordable gym and training kit. This rashguard is definitely on the cheaper end of the BJJ kit market and it wore incredibly well. Whilst it isn’t the toughest rashguard on the market it’s certainly one that I would buy again and is one I’d recommend to both experience grapplers and people just starting out.

The Japanese Floral Short Sleeve Rashie (and others) are now available directly from their UK site and it currently retails for the bargain price of £19! Whilst USA shoppers can pick it up for $24.