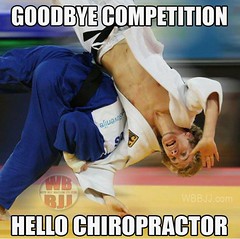 One of the things I planned to blog about this month was revisiting my part-time grappler experiment to review if things had changed and how I’d improved my mat time. The simple answer to that is I haven’t and that’s mainly due to a back injury I sustained during my World’s preparation. It’s also linked to why I am taking a break from competitions so no blog from Lisbon this year either. But it does give me a chance to highlight one of my backroom support team heroes – my chiropractor!I haven’t just started using a chiropractor, I have had a long-standing issue with my right hip following a car accident that caused whiplash, some lower back damage and a pelvic tilt many years ago. With positive treatment, I still needed the occasional tune-up every 3-4 months but it’s been nothing that stopped me training muay thai or later on my  BJJ and Judo.

So when I hurt my back prior to the world’s (SI joint, L3/L4 facet joint and a flare-up of my hip) I obviously sourced the help of my chiropractor (working in a tag team with my Sports Therapist – but he’s another post including this one on massage!).

A quick search of the internet shows that chiropractic treatment gets a very mixed set of reviews. In terms of whether or not it is an effective treatment obviously, I have found it helpful (or I wouldn’t be writing about it!). But NICE also issued guidelines for the treatment of lower back pain in 2016 and these included the use of “spinal manipulation” as part of a care package including exercise. Similarly, a research review in 2010 of scientific evidence on manual therapies for a range of conditions concluded that spinal manipulation/mobilization may be helpful for several conditions in addition to back pain, including a migraine and cervicogenic (neck-related) headaches, neck pain, upper- and lower-extremity joint conditions, and whiplash-associated disorders. 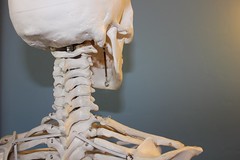 In the UK it is generally classed as a complementary and alternative medicine so it’s rare to get it on the NHS so you do tend to have pay privately. However, the NHS site on the topic acknowledges it may be helpful help with pain in muscles and joints including back, neck and shoulder pain

In the UK chiropractors are regulated by the General Chiropractic Council (GCC) so you should only go a see someone who is registered (you can check if someone is registered on the GCC website). Typically to become a GCC registered chiropractor, UK graduates must have successfully completed a GCC recognised university degree programme, typically lasting 4 years so it isn’t something anyone can attend a weekend or two course on and claim to know how to do it properly! Also, it’s always worth getting word of mouth recommendations etc.

However, there are some warning signs to look out for as well: 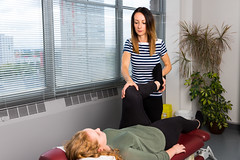 Everybody knows someone on the mat who has injured their neck or lower back through repeated training or a freak accident. It’s one of the more limiting injuries you can get as it really does limit your training and enjoyment of BJJ. I’ve obviously used chiropractors myself but I have also recommended them to my husband and a few friends (who’ve also benefited).

As an aging grappler, I’ve found them an awesome addition to my support team so might just find that too!

PS Just to add my personal chiropractor is Lindsay at Salford Chiropractic Clinic if you’re local it’s definitely worth giving her a try (and she didn’t pay me to say that either!)

One thought on “Using a Chiropractor”