Just over a year ago I blogged about a whole host of things that you might not thinking about when starting to compete. Most of these were either extremely random or the just “so obvious that you may forget”! But after a few local competitions refereeing I recently I found a few more related to clothing and kit that needed adding to the list!

A lot of the things I’ve spotted link to ladies clothing so I’ll cover these first. Quite often a female higher grade belt gets the job of pointing out clothing tips to beginners but I’ve noticed an increasing number of these so I am guessing people are forgetting……

T-Shirts
I understand why a lot of people wear these under their gi. There comfortable, cheap, easy to get hold of and perhaps people secretly love how a sweaty wet t-shirt can create the most claustrophobic choking environment ever known (think jiu jitsu waterboarding!). The IBJJF states you can wear a tshirt but they should be “stretchy or elastic shirt that hugs the body beneath the GI” so your standard baggy gym shirt is not strictly allowed. It certainly isn’t allowed over a rashguard for no gi. Ultimately there are worse competition mistakes but a baggy shirt is much easier to accidentally grip and to get caught up in (think broken fingers, tears and accidental flashing). 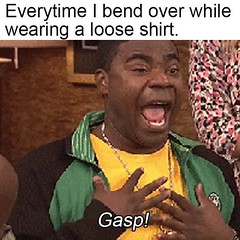 There is no polite way to put this. But really consider the cut of your neckline if your not wearing a rashguard. V necks and low-cut tops do increase the risk of flashing your boobs especially when leaning forward, bending down, spinning upside down and being essentially folded in half! And that’s before accidental grabs resulting in tops being pulled and moved. I recently moved my refereeing position during a recent comp simply to protect for the modesty of a grappler due to a minor boob flash. I also know of another referee having to essentially having stop a match due to spillage. Apart from the embarrassment factor surely there is nothing worse than not being able to focus on your grappling because you can sense something becoming “exposed”. 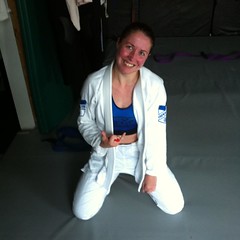 I totally understand the desire to wear a sport bra to grapple in. It’s not just the influence of MMA but also because sometimes it gets really hot and anything that helps keep you cool in a gi is a definite bonus! But a random sports bra / crop top generally does not have the support needed for BJJ. There just not designed for it so please consider wearing a sports bra underneath and / or looking for one with more coverage to be a bit more forgiving if it moves. Remember most sports bra manufacturers idea of medium support is a gym work out, not inverting upside down whilst fending off aggressive hugs. If you are after a BJJ specific one I’ll be honest I love my Scramble one which I bought a few years ago (but I do still wear a sports bra under it for support).

Booty Shorts
Seriously they are your friend. I wrote just over a year ago about sensible underwear and whilst I haven’t seen any thongs in a while I have seen a range of fabulous underwear as those gi pants started to move! The IBJJF even specifically mention that bottoms under the gi are allowed “pants made of elastic fabric (clings to body) under the GI pants, as long as these pants are shorter than the GI pants.” Pink and Victoria’s Secret are great knickers but you really want to just leave memories of your jiu jitsu in the eyes of the spectators. Not your favourite undies!

I have written about BJJ hair and hair care in the past so I won’t go into in great detail. Obviously in competition deliberate hair pulling is illegal but there are also rules re your hair do – including making sure that it tied up so that it can not cause your opponent discomfort (so avoid metal hair clips and ties that could dig into yourself or your opponent). Athletes will also be disqualified if they are wearing hair dye that stains their opponents’ gi. So be careful, whilst hair that matches your belt colour might be cool it also might cost you the match! Also be aware that you need to ensure it stays up. There is nothing in the rules to say that a ref has to stop the match so that you can tie up your hair. Some refs do, some don’t! It’s something to consider when training that you might need to fight a little while whilst doing a Cousin Itt impression!

Cups & Headguards
Most people (boys) are aware of not wearing a cup. Cups are not allowed under IBJJF rules as by their nature they are made out of a hard substances. It’s thought that wearing them can increase the risk of injury or discomfort when attacking the back etc as well as creating a technical advantage when applying armbar submissions. I have also recently been asked regarding headguard – the IBJJF rules state there not allowed if there made from a hard material (for similar reasons to cups). You can wear soft ones but these do tend to move and also give extra grippage (try getting out of a triangle with one on!). For competition a better option to head guards maybe to simply grin and bear it (and drain your ears afterwards) or to get creative with some tape! 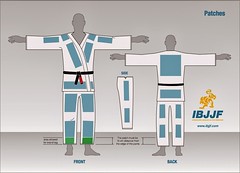 At local competitions people don’t generally care about the colour of your gi or if you have more patches on it than a racing car. In fact I loved the range of patches that one competitor I refereed recently had on – it was almost distracting! But just because local tournaments aren’t that strict on the gi checks please don’t take it for granted especially if your planning on competing frequently. If you are competing please make sure your gi is clean and make sure you check the rules in advance regarding patches. There are always an annual stream of comments on Facebook from people doing their first british open / IBJFF / UAEJJF comp and getting pulled at the gi check. Think about doing it as an extension of your game planning – having a light, legal and well-fitting gi means that you can just focus on the important things like your BJJ!