I am currently jetting of on holiday for a couple of weeks and I have had friends and colleagues ask if I’m planning to train. The conversation usually goes “of course” followed by “I thought you were planning to have a relaxing holiday now your not travelling and competing?”

It’s never crossed my mind not to train whilst on holiday as I have friends to visit and new gyms to explore but it did make me think a little bit. Is a vacation or break from training a good thing and something I should actively do. Or should I avoid losing mat time especially when it’s my decision rather than something forces through injury or illness?

At the end of the day there’s a range of approaches to this…..

But I’m only a part time grappler? 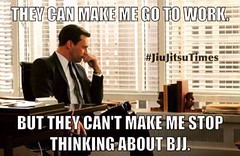 This viewpoint isn’t backed by science but rather factual logic. Jiu Jitsu isn’t my life or job so I should enjoy it whilst I can. Inevitably life will throw something in the way whether its illness / injury or something less traumatic such as a bad commute, a late meeting or family responsibilities. Therefore doing what you can when you can even on holiday isn’t always a bad idea as breaks will happen without being planned.

But then again sometimes your body needs a break (especially if you don’t want one enforced by injury!)

Rest can be a crucial element of training we often forget. Holidays are a chance to change your pace and to give your body a chance to recover. Not just healing in terms of injuries and niggles but also to prevent conditions such as overtraining (which can really affect your longer term success). Residual fatigue is real. A study of Olympic swimmers found fatigue markers still present in rested athletes six month after the end of the season. No surprise that if you continue to push hard then you’ll carry some of that fatigue into your next training camp and increase the chance of injury illness. Although there is a catch as a lot of the research doesn’t suggest total rest more a change of pace or activity.

Your metabolism won’t thank you you for the time off though!
A new study from the University of Liverpool asked a host of volunteers who were active to simply be less active. They sat more and did less than 2,000 steps. Almost all the volunteers developed something they called “metabolic derangement” during the two weeks of being still. Their blood sugar levels had gone up, insulin sensitivity decline, their cholesterol profiles declined and they loss a little muscle mass as well as gaining fat. Luckily the effects were quickly reversed for most participants after a couple of week of returning to their normal activity levels. But for some reason a couple of the volunteers did not return to the same level of exercise as before and had longer lasting symptoms of insulin resistance.

But your internal organs might!
According to a recent article in British Journal Heart – During excessive exercise, the body releases more free radicals than the body’s antioxidants can handle, risking harm to internal organs and tissues. So rest is important not just for muscle recovery but also the internal bits too.

But sometimes it’s just about the mental break 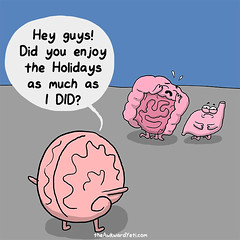 Jiu Jitsu is hard work on the brain (and your ego takes a battering as well) so sometimes a break is as much about recharging your brain and rediscovering the love of the mats as is it physical recovery. A break away may help you realise there is no place like your home (gym).

Training breaks essentially don’t have to be about going physically away on holiday. A training break can be great for the brain and the body as long as it does not slip from a short break into a longer habit. But I think at the end of the day it’s about doing what’s right for you, your holiday plans and your plans with your other half (training on holiday can affect your marital status!).

It doesn’t have to black or white. If you can’t sneak off to an open mat then you can still consider incorporating exercise into your holiday plan (like walking, swimming and hotel gyms). Similar there is nothing wrong with a complete break.

Although personally I think the health benefits are enough to give you an official excuse to pack that gi! I certainly am on my next trip (although I’ll be taking a few days off to enjoy the sites!).

One thought on “Should You Take A Vacation From Training”