Street Sports BJJ is the final gym that we visited during our recent trip to the states. Based in Santa Monica it’s home of 6th-degree black belt Renato Magno and is one of the more established gyms in the area (it’s been opened since the mid 90’s) so we thought we should check it out!

Renato Magno is the head coach at Street Sports and he took the class when we attended. As I’ve already mentioned he’s a 6th-degree black belt (receiving it in December 2017) and he’s simply one of those practitioners who when you read about him you really do wonder why you’ve never heard of them before! Plus in addition to a range of BJJ and Judo related achievements he has worked behind the scenes on a number of movies and TV shows right up the present day.

The gym its self is based in a row of shops but it doesn’t have its own car park. Street parking around the gym is limited to around 2hrs which does work for most classes. However, there is also a metro stop around a block away with lots of parking available all day for three dollars which is where we parked up. Street Sports is a smaller gym than the others we visited but is comparable in size to many UK gyms. The changing facilities were still better than many in the UK with separate male and female changing including showers (and a unisex toilet). The ladies fitted 2-4 people at a time and had free lockers to store your things between sessions. Plus as expected everything was spotlessly clean.

Due to sat nav problems, we literally arrived as class was starting. However, we were quickly talked through the disclaimers in the reception and shown to the 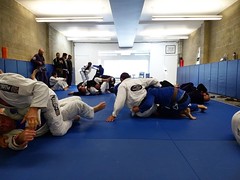 changing rooms. Once changed we were quickly introduced to Renato and allowed to join in the class.

By Renato’s own admission the class was a little more cardio based than normal but it still contained some great technical details. There were about 18 of us on the mat and although the mat was full the class was structured to enable us all to drill and roll simultaneously. Following a comprehensive warm-up, the technique was based around a defending a closed guard arm attack leading into your own submission attack chain. Each step was broken down into precise micro-detail with plenty of help both during the instruction but also whilst drilling the various moves. This was followed by pressure testing the techniques (each one number and done on command whilst jogging around the gym) finishing with brief 2-minute rolls with various partners. After the class was an open mat so I also grabbed a really nice couple of rolls before admitting I was definitely tired!

I think the simplest way of describing our experience at Street Sports is that we walked in a visitors and left with new extended BJJ family! Renato was very generous with time and energy both in terms of coaching and simply talking to us as people. The mat had a great mix of belt levels (white to black), ages and size. I had some great training partners during the session. Plus everyone had a really open approach sharing tips and tricks (including the sloth guard!). It may not be as famous as some of its BJJ neighbours but it was a great place and without a doubt, I will visit again if I’m in the area and I would recommend anyone to check it out!

In terms of the practical stuff, you do need to contact them in advance to let them know when you are planning to visit. The day drop-in fee is currently $40. Certain classes are restricted depending on your belt level but all gis are allowed at the gym allowed as long as they don’t have club patches on them. If you have any queries there really good at responding and explaining everything!

Picture Credit – Street Sports BJJ Instagram (as I was too busy training to take pictures!)

One thought on “BJJ Minion on Tour – Street Sports BJJ”