You really are spoilt for choice for BJJ training within the capital and have blogged about a host of gyms that I’ve visited include New School, Carpe Diem, and Fightzone. On this occasion, I took the opportunity to try out a new venue Tokei Fitness Centre as well as the chance to catch up with my original BJJ instructor Liam Wandi.

Tokei Fitness Centre is a stone throw from London Bridge and as the name implies offers a range of fitness and gym activities combined with a host of martial arts including Brazilian Jiu-Jitsu. The centre is actually really established as it started as a Martial Arts centre back in the ’70s. The club offers five BJJ classes a week alongside a host of Judo and wrestling classes. In fact, the session I attended was straight after the Judo class so it was no surprise that a number of those attending may only be white belts in BJJ but certainly had a host of grappling skills already!

The dojo itself falls under the category of small but perfectly 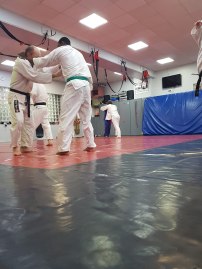 formed. It’s not the largest mat space but its clean and because it caters for judo and other martial arts the mats are high quality and comfortably cushioned as you’d expect from a judo venue! Again as the facilities are part of the gym the women’s changing room was as you would expect from a private gym – clean, pretty, showers, lots of lockers, well laid out for privacy and also those nice touches such as tissues, hairdryers and straighteners.

As this wasn’t exactly my first class with Liam I already knew the session would follow a tried and tested logical format. A gentle warm-up, into individual movement drills before chaining together the techniques of the day followed by specific sparring and rolling. In this case, it was looking at a range of options from the feet including distance management and takedowns, leading into position control (mount and S mount) before finishing with a clean collar choke. As always Liam layered in technical details both from a self-defence and sports perspective to cater for the range of students. This was followed by specific situational sparring for a couple of rounds before normal rolling. Full disclaimer we were slightly selfish and essentially I rolled with Liam for all the full rounds! This didn’t just give us a chance to catch up on the mat but also enabled me to get some mini micro details for my own game whilst he got to frustrate / squish /tap me (deleted as appropriate)!

I’ll be honest that at this class I was the only lady on the mat. The class does have another couple of female attendees but they couldn’t make this session. But it genuinely didn’t matter the guys were both really welcoming and friendly and my gender didn’t feel an issue on the mat. I know some people are surprised that I comment on this but unfortunately there are still gyms and session where I felt tolerated rather than welcomed! I also notice that I was far from the only visitor on the mat with a couple more students from another gym in London also attending so I suspect due to their class time and location they are used to wandering grapplers!

As I mentioned at the start of the blog you really are spoilt for choice for BJJ in London but Tokei Judo and BJJ is a little bit of a hidden gym. A central London location (a v short walk from the tube) with good class times throughout the week and a really chilled vibes make it a gym that’s definitely worth checking out. Especially if you like combining your BJJ and Judo or prefer a little bit of self-defence flavouring to your training!