Bruises – nobody want them but they’re an inevitability for women in BJJ. Whether through our own clumsiness, our training partners or just because they just mythically appear (which they do!) they will become a part of your life. So here’s my bruises 101 survival guide. 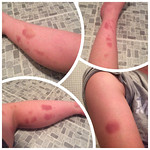 First steps
Basically bruises appear on the skin when tiny blood vessels, called capillaries, break or burst underneath. The blood from the capillaries leaks into the soft tissue under your skin, causing the discolouration. So the first thing is if you know that you’ve got a bruise developing is to try and stop the bleeding. You can do this by cooling the area with a cold compress (a flannel or cloth soaked in cold water) or an ice pack wrapped in a towel (don’t put ice straight on the skin as ice burn and a bruise is even worse!). Along with the ice you can also use compression and elevation like you would for a sprain although this is more for seriously big bruises. I’ve only had to resort to this post thai boxing fights and not BJJ (yet). Again it minimises bleed and prevents pooling.

Yup I’ve got a bruise
Now the bruise has developed or magically appeared. Its about treatment and damage limitation so…..

Arnica Cream – Some people query its effectiveness but I swear by it to help speed up my bruise healing time. You can get it quite easily in boots, superdrug, most chemists, Neals Yard etc. Just rub it on the bruise at least every night. I have a cream with lavender in it so at least I smell nice in bed and apparently it helps my other half sleep better.

Massage – Disclaimer this hurts! But it does potentially help. Massaging the area will help move the pooled blood. It might make the bruise bigger to start with but it does help with healing. I prefer to do it myself when rubbing cream in or just by randomly prodding it (I like to check if it hurts!). Or you can get someone to do it for you. Although I tend not to go full massage unless the bruise is linked to a dead leg or muscle knotting (I’ve also done a blog on basic massage). A kinder way of using massage if you can afford / find / fit one in is a nice Jacuzzi. The gentle massage, warm water and relaxation works a treat!

Epsom Salts – there is a lack of evidence on this one regarding if it actually works but it’s also a nice bit of pampering so it can’t do any harm! Run one nice hot bath, add a couple of cups of Epsom salts, soak and relax preferably with some nice music on and candles (although they are optional!). Piece of advice though don’t wash your hair in an Epsom salt bath – its drying and can leave your hair a bit frizzy / straw like! (more on Epsom salts in my bath time favourites blog)

Ibuprofen – I only use this if it seriously hurts but you can take ibuprofen it you’re in pain with it. As well as a being a pain treatment it also has anti inflammatory qualities. If its due to pain I tend to take it orally rather than use the gel.

Vitamin C – There is some evidence that vitamin C will also help bruise healing. I’m not convinced but as it’s a water soluble vitamin the chance of doing any harm by having too much is slim so feel free to try it! You may find it beneficial to try and Berocca or similar supplement as the vitamin C may help with bruising but increased bruising is also linked to a shortage of vitamin B12 taking a multi vitamin with B12 in it wont help the bruises you have but it may be useful to see if it helps reduce the number you get!

But I’ve got a……
Life goes on and you shouldn’t have to change your female (or male) style just because of a bruise.

Make-up – I’ll be doing a blog regarding black eyes soon which gives more details on cover-up but for basic leg bruises foundation and concealer can be your friend.

Tights, Leggings, Skinny Jeans – Thank the stars for making these all fashionable and affordable. Depending on the level of the bruises you can vary what you wear.

Bare all – Sometimes I just grin and bare them. Realistically not that many people stare at my legs etc. so I have been known to flash by legs and let them get some sun and vitamin D.

I hope some of these tips help but if you know of any other sneaky tricks that help then please get in touch and let me know!