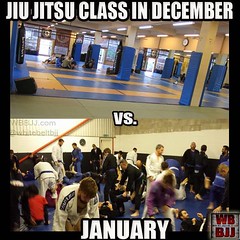 It’s January and the mats are heaving with lots of enthusiastic white belts keen to learn self defence, discover martial arts, train UFC stuff, get fit and every other variation in between. Not to mention a few higher grades that may return from the wilderness of xmas celebrations and promotion celebrations!

If your one of those starting out there are a few blogs on the web sharing top tips on things you need to know when you’re starting BJJ but I thought I might as well add to that list but with my usual female minion slant.

You’re gonna get sweaty and if you can’t handle that then this is probably not the sport for you. You certainly will not look cool, calm and collected and the end of an average BJJ class. So be prepared in advance and take off all your make up, make sure you’ve used your deodorant, tie your hair back (I’ve done a previous blog on hair for tips on that) and be prepared to tie it again!

What to wear?
For your first few classes you may be in a hire gi or you may get given a gi as part of a starter package. In either case it’s important to consider what to wear underneath. A few things nobody ever gets told-

No thongs – If you’re a thong wearing lady be prepared to get some big girl pants! It’s actually part of the competition rules of BJJ and when you think about it it’s actually for your safety and comfort. Some moves involve grabbing the pants and pulling up. Yes you will get a potential wedgie or in the case of a thong a potential cheese wire effect (I’ll just leave that to your imagination!).

Shorts  /  Leggings (Spats) – You’ve got nice underwear on but you probably don’t want to show it to everyone. Gi pants can and do fall down occasionally. I always wear booty style lycra short under my gi as a minimum (and leggings / spats when it’s cold). It just means you can relax if you feel you gi pants slipping. Its also a source of extra security when it’s that time of month (sorry boys but it’s true!)

Sports Bra – Pretty common sense but it’s not just about support. It’s also about the smoother seams (less rubbing) and reduced potential for to ride up and move about.Yes when it comes to my grappling I’m all about the comfort!

Full neck rashguard / vest or tshirt – What you wear under your gi is a matter of personal preference but often you’re in mixed classes. This means you have to balance your own comfort with that of your training partners too.

Rash guards are my best friends (and a must for competition) but you can always wear a normal t-shirt / full necked top that hides your cleavage when starting out at training. The reality is that some moves in BJJ do involve pulling the gi away, hands under armpits and basically moves that mean you can’t help but notice any cleavage on display. Make life easier for everyone by covering it up! Plus it also reduces the chance of any accidental boob displays. I have on rare occasions wore sports crop tops for training but that was in competition training in a heatwave or training abroad.

And before anyone think I’m targeting this just at the men, I’m not! One of my worst comp experiences involved a female white belt with a low cut crop top and being stalled in her closed guard by holding her head into her boobs! It just wasn’t fun!

How to Tie Your Belt
Someone at the gym will help you but save yourself that awkward phase of being stuck in the changing room and be prepared! Again I’ve done a blog that will help.

Higher Belts can be appear mean! 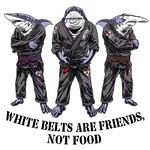 In January there are three potential reason why the higher belts might be a little aloof (or appear unfriendly and mean) to the new whites belts.

But you will find your Mat Angel / Big Bro / Partner in Crime. 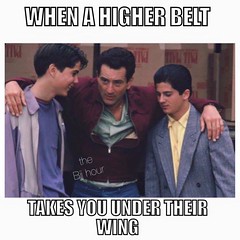 My BJJ Big Bro has been featured in the blog before. He helped me get through those horrible first few weeks of not knowing what the hell I was doing and was rewarded with the challenge of being my first coach! But over time I’ve also had a few mat angels who have made sure I didn’t get stuck with the really enormous / smelly / biffy person and a couple of partners in crime who help make rolling and drilling that extra bit more fun. I was uber lucky that my big bro was an experienced purple belt at the time but anyone can be that person and I’ve tried to return the favour (even as a higher white belt) to smooth the transition of people into the mad world of BJJ.

Feeling Rubbish
As I’ve mentioned above you will not know what you’re doing and will potentially feel that your rubbish. Don’t worry you are! Plus you’re a beginner, it’s allowed! Two things will happen. One is that if you’re in a gym with a good beginners programme and a structured way of teaching then things will start to make sense and you’ll at least start to see how things can fit together (doing it might be another task but hey! baby steps!) and secondly you’ll realise feeling rubbish is a relative term and everyone gets tapped, everyone has bad days, everyone has weaker aspects to their BJJ and nobody knows everything (not even instructors!).

There is plenty more I could have added list but this is supposed to be only for the first few classes!

All I will say is to remember that BJJ isn’t for everyone (yup I’ve said it!). Unfortunately rolling around on the floor with your friends whilst getting sweaty and trying to choke and joint lock them isn’t everyone’s idea of fun. But if you do your first classes and find yourself falling in love with the sport then congratulation! You’ve not just got yourself something you can do for the rest of your life but potential a whole new extended family and friends network! Enjoy!

4 thoughts on “Things nobody tells you when your starting BJJ….”