I first tried Full Body Cryotherapy way back in 2016 when I visited the states for the World Masters. I’ll be honest I was slightly dubious about it at the time but after trying it for a couple of times I now really do believe that it is beneficial particularly for recovery. Unfortunately for me, full body cryotherapy was difficult and expensive to access in the UK (despite extensive googling) so it became a holiday treat rather than a regular experience. But that has now started to change with more clinic opening up in the UK  (including a Cryotherapy chamber in my own gym!) so I thought it was time to write some more of my thoughts about it. 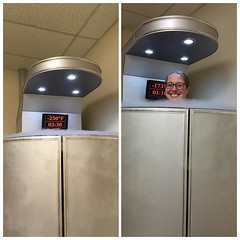 Full body cryotherapy is claimed to have a host of benefits including reducing inflammation, better sleep and weight loss just to name a few. In a short blog, I can’t cover all the benefits and science but hopefully, I’ll provide enough for you to make an informed decision and signpost up to further reading.

Pain Relief, Reduced Inflammation and Muscle Healing
One of the biggest advantages of Cryotherapy is in pain relief reduced inflammation and muscle healing. Whole body cryotherapy associated improvements in muscular tiredness, pain, and well-being after strenuous exercise have been reported in the majority of the reviewed studies on the topic (1). In part, this is thought to be the result of the cryotherapy’s impact on inflammation at a biochemical level (2). There is also sufficient research evidence a genuine reduction in pain (3). This may be linked to the reduced inflammation but there is also evidence to suggest that there is a reduction in nerve conduction velocity affecting the level of pain we feel (4).

Cryotherapy could improve your recovery rates beyond muscle soreness and pain. In a randomized crossover study, 11 athletes performed better on a protocol test before and after a run. This was supported by lower heart rates, oxygen consumption and their ratings of perceived exertion (how hard it felt). It was presumed by the researchers that this recovery is presumed to be a result of improved oxygen for the working muscles and less strain on the heart and veins (5).

Weight Loss
Now don’t get excited! This won’t result in you ditching your pre-competition diet and reaching for the doughnuts! There has been some research linking regular exposure to the cold to weight loss but specific research linked to cryotherapy hasn’t shown any specific benefit (6). However, that hasn’t stopped people reporting that it has helped with their weight loss. There is a theory that the improved recovery experience from cryotherapy may actually be the reason. If you feel better you can exercise more and with increased intensity so better weight loss. Personally, I have found it can help with water retention. I’ve used cryotherapy after long haul flights

It Boosts the Immune System
Cryotherapy helps with inflammation and this is thought to help with a range of medical conditions. Whilst the evidence is limited in terms of how it works on various conditions it is still in its earlier stages there is some research to suggest it just boosts the immune system generally by increasing white blood cell count(especially lymphocytes and monocytes) and Interleukin-6, a protein that has both pro and anti-inflammatory effects (7)

There is a scientific reason for this a recent study found that people who had whole body cryotherapy for two minutes at -110°c, three times a week for 12 weeks, experienced a two or three-fold increase of norepinephrine levels in their blood (8). It usually releases by the brain when you’re in fight or flight mode as it increases alertness, and focuses your attention. There is also anecdotal evidence that it also improves sleep but the research on this inconclusive as there is the possibility that the improved recovery and decreased pain may be an underlining reason behind the reports of enhanced sleep. (9)

It’s easier!
Ice baths are an alternative but let’s be honest they’re a bit messy to do at home! For a start, we don’t tend to have ice machines or a big enough freezer in the UK to keep a significant volume of ice. It also takes longer (20 minutes compared to 3 minutes cryotherapy) and I’ll be honest ice baths hurt and are mentally difficult compared to cryotherapy. Temperature wise cryotherapy is simply colder – as a result of the treatment, the skin temperature varies from 32° C to 35°C in Cryotherapy and 45° C to 60°C in the traditional method.

There a number of full body cryotherapy chambers opening up around the UK but obviously if you live the Greater Manchester area then you should consider visiting my nearest one – Factory Cryotherapy (who are based where I train). You can check them out via their website or social media. As with anything, prices change and there always various promotions but, at the time of writing it’s priced at £25 per session or two for £40. Plus where else can you jump into a class or open mat prior to cooling off (literally).

I hope this blog has answered some of your questions or perked your interest in giving cryotherapy a try. Fingers crossed I’ll see you soon at Factory – on the mat that is rather than in the cryo chamber – because then you’d be half naked and that would just be weird lol!